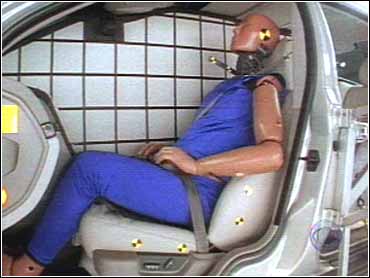 Are federal safety standards for car seats too weak? In part three of a three-part Eye on America investigation, CBS News Transportation Correspondent Bob Orr reports that one top regulator believes changes should be made.

Since the mid-1990s, parents have been told that putting children in the back seat is a good idea for their safety. So that's precisely where Kevin and Diana Gleason strapped in their five-year-old daughter, Sarah.

"We never dreamed that a seat could break back and kill someone," says Diana Gleason. "It never occurred to us. You don't think about that when you put your kids in the back, you think they're safe there."

Sarah was crushed to death after Kevin Gleason's seat collapsed when the family's General Motors-made Buick was hit from behind. "We don't want another family to go through this - it can be changed...it needs to be changed," says Kevin Gleason.

GM has long argued its seats are designed to give way to minimize driver whiplash injuries. But what does GM say about the risk the seat poses to people in the back seat - to children like Sarah Gleason? One GM expert testifying in a seat back failure case in Illinois conceded that it is a problem. The problem, in his words, is really a secondary consideration.

According to top auto regulator Sue Bailey, part of the problem is that the federal standard for seat backs has not been updated since 1968. "We've known for years that one of the areas that probably has not received enough attention is what happens to your seat when you have a rear-end crash," says Bailey, administrator of the National Highway Traffic Safety Administration.

"It's not acceptable and that's why we're changing it," adds Bailey. "And we hope by early next year to have out the system that will look at the seat back itself. So we're going to revise these standards because it's not approprite that we are working off of 30-year-old standards."

For years, consumers have been filing complaints with NHTSA. CBS News has obtained a file of more than a thousand reports of seat back failures in rear-end collisions.

And not just with GM vehicles. Over 30 years, NHTSA has heard about seat back collapses involving more than two dozen different cars, including models made by all of America's major auto manufacturers.

But is it possible to make a seat that doesn't collapse? Some carmakers now have, including Volvo. And so has Saab - with a seat designed by GM.

Yet American automakers, for the most part, have not done it. All of which makes no sense to the Gleasons after their loss. "I don't understand how a board of directors can make those decisions," says Kevin Gleason.

The Gleasons sued GM and settled the case before it went to trial. It's a practice that has allowed GM to keep damaging internal documents from being made public.

Bailey hopes a new law will change that. "We now will have discovery and enforcement capability because of the new bill that was recently passed by Congress so that we can find out about information, about lawsuits, about claims, so that we can inform the American public," says Bailey.

As for strengthening the seat back standard, the rulemaking process could take years. But in the meantime, nothing is preventing automakers from strengthening seats before the government orders them to.