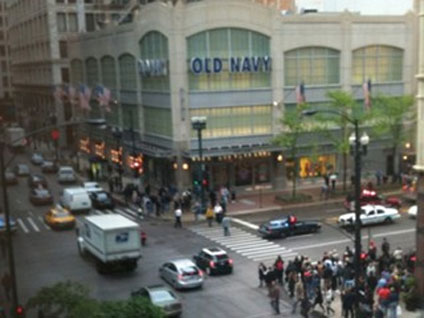 CHICAGO (CBS/WBBM) Police say a man shot and killed his girlfriend, then turned the gun on himself inside a Chicago Old Navy in the heart of the city's Loop retail corridor.

At a news conference at the scene, police Chief of Patrol Eugene Williams said officers on patrol shortly after 11 a.m. saw employees running out of the store. The employees told police shots had been fired inside.

When officers went in, they found two people in the basement area, both of whom had suffered gunshot wounds. The man and woman were both in their 20s, Williams said.

The shooting happened in the basement of the store, which is a restricted area for employees only, Williams said.

Police sources tell CBS affiliate WBBM's Suzanne Le Mignot the man walked into store and shot and killed his girlfriend, before turning the gun on himself and taking his own life.

The woman who died was an employee of the store, the police source said.

Williams did not know if the store had surveillance cameras, nor how the gunman got inside.

The Cook County Medical Examiner's office could not immediately confirm any information.

Two witnesses in the store told WBBM Web Producer Todd Feurer they heard the shots. The witnesses were waiting to give a statement to police.

Minh Dang and his wife Jessica Dang had just arrived from San Francisco early Friday morning and were shopping at Old Navy at the time of the shooting. They didn't hear the shots or see the shooting, but said that as they were shopping, employees suddenly announced that everyone needed to leave the store.

"As we were coming down the escalator to pay for our merchandise, we saw people scattering in general and then we saw cops coming in and there was a store manager at the base of the escalator yelling with a sense of urgency 'Leave. Trust me, trust me. Leave,'" Minh Dang said. "We just grabbed our merchandise, then we saw four or five cops come in with their guns pointed at us."

Minh Dang said he was carrying a camera under his jacket when police arrived, so they frisked him before they allowed him to leave.

His wife said it was a harrowing experience and, at first, they thought it was some kind of prank.

"I just kind of thought it was a joke," Jessica Dang said. "And when we realized it was something real serious, when she said it with a sense of urgency and then certainly when we saw the cops come in with their guns drawn, we started taking it seriously and just tried to get out of there as soon as we can."

Police initially closed down a section of State Street, but it was reopened a short time after noon.