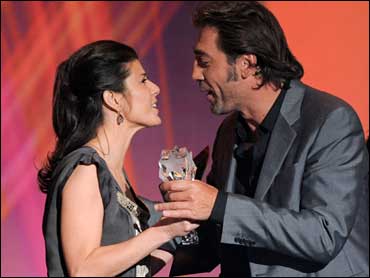 Bardem accepted for the absent Coens, saying, "I'm the third brother, the Spanish one."

He was humble when collecting his own trophy, acknowledging each of his fellow nominees.

"I guess I was lucky tonight, but it doesn't mean it was the best work at all," he said. "All the performances were truly heartbreaking. I'm just a lucky guy."

Photos: Red Carpet
Photos: Inside The Show
Story: The Winners

Awards came in pairs for three other films: "Hairspray," "Juno" and "There Will Be Blood."

The 19-year-old thanked "my mommy who's sitting here crying and my other mommy who's at home, John Travolta." Travolta famously cross-dressed to play Edna Turnblad.

"There Will Be Blood" earned the best actor honor for star Daniel Day-Lewis and composer Jonny Greenwood won best composer for his haunting score.

"I owe everything to (writer-director) Paul Thomas Anderson, my evil twin brother," Day-Lewis said from the stage. "My working partnership with him and my friendship with him has been one of the most important of my life."

Photos: "There Will Be Blood"
Story: The Mystery Of Daniel Day-Lewis

Julie Christie won best actress for "Away From Her," but she wasn't on hand to accept her prize. Also absent was best young actor Ahmad Khan Mahmoodzada, star of "The Kite Runner," and supporting actress Amy Ryan, who co-starred opposite Casey Affleck in "Gone Baby Gone."

Glen Hansard and Marketa Irglova, who won best song for their work in "Once," also skipped the ceremony.

"I look at it as a win for all the people who worked on the film. It was a film that was long in gestation," he said. "Animation is coming more and more to the forefront and it's great because people see that it's not an obscure art form, it's something accessible and fun."

The critics chose "The Diving Bell and the Butterfly" as the best foreign film. Director Julian Schnabel was humbled by his win.

Asked backstage how he felt, Schnabel said, "a little drunk and pleasantly surprised."

3George Clooney, a nominee for his starring turn in "Michael Clayton," presented the inaugural Joel Siegel Award to Don Cheadle for his humanitarian work.

Before introducing his friend, Clooney noted the impact of the Hollywood writers' strike on the city.

"This is a one-industry town and when a strike happens it's not just writers or actors, it's restaurants and hotels and agencies," he said. "And our hope is that all of the players involved will lock themselves in a room and not come out until they finish."

Cheadle also acknowledged the strike, saying it kept him from writing an acceptance speech.

4 With no picket signs in sight, stars were free to attend despite the writers' strike.

And attend they did, with Hollywood royalty Brad Pitt and Angelina Jolie among the show's guests. Clooney also walked the red carpet - but he wouldn't have had there been pickets outside.

"I belong to six unions," he said before the show. "I wouldn't cross a picket line."

The Writers Guild of America strike, which began Nov. 5, has effectively shut down Hollywood and cast a pall over Tinseltown's awards season. But the Critics' Choice Awards, presented by the Broadcast Film Critics Association at the Santa Monica Civic Auditorium and broadcast live on VH1, wasn't covered by guild contracts.

The guild's promise to picket Sunday's Golden Globe Awards prompted organizers to scrap the ceremony in favor of an hourlong press conference to announce the winners.

The Critics' Choice Awards broadcast was free-wheeling, with several comments bleeped, although one word by presenter Leslie Mann slipped onto the air. Also, when host D.L. Hughley asked Bardem what motivated his performance (as a heartless assassin) the actor responded: "George Bush."

The Critics' Choice Awards also poked fun at projects that performed poorly as Hughley reflected on "the entertainment community's most significant losses this year."

A list of films with big budgets and low grosses followed - along with the 65th annual Golden Globe Awards.

"Into the Wild," written and directed by Sean Penn, had a leading seven nominations but didn't win any.

The Broadcast Film Critics Association, which represents more than 200 TV, radio and online critics from the United States and Canada, founded the Critics' Choice Awards in 1995.