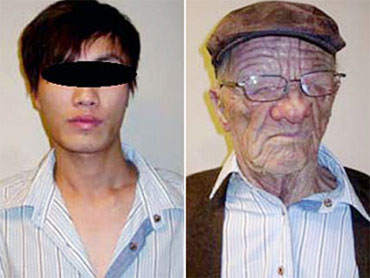 U.S. Homeland Security Secretary Janet Napolitano said Saturday that the case of a young Chinese man who boarded a flight to Canada elaborately disguised as an elderly white male raises concerns about a security breach that terrorists might exploit.

Authorities have not suggested any terrorist link to the case of the man who boarded the Air Canada flight in Hong Kong on Oct. 29 wearing a remarkably detailed silicone mask to make him look like an elderly man. An internal intelligence alert from the Canadian Border Services Agency shows before-and-after photos, and says the man removed the mask in a washroom mid-flight.

Air Canada confirmed a passenger on board flight AC018 had altered his appearance and had been met by border services officials in Vancouver, British Columbia. The Chinese man is seeking refugee status in Canada in what border officials are calling an "unbelievable case of concealment." Canadian authorities did not release any information about the passenger's identity.

Canadian Public Safety Minister Vic Toews expressed concern over the broader implications of an elaborately disguised man being able to board a commercial airliner under an assumed identity.

Napolitano expressed similar concerns on the sidelines of the Halifax International Security Forum about the use of such "an elaborate mask."

"I saw the pictures. I don't have the actual operational details, but I think these are further illustrations of different tactics and techniques used," Napolitano said.

Napolitano said she didn't know any details of the case beyond what was reported in the media.

"I understand it's under investigation, as it ought to be," she said.

Napolitano said the U.S. was actively trying to protect air travelers, including working on an agreement with the European Union that would provide advance information on airline passengers.

"Good security is layered security. It begins with information sharing, information collection . . . good screening and scanning techniques at the airport gates themselves," she said.

A Canadian government official gave the alert to The Associated Press. The official provided the document Friday on condition of anonymity as the official was not authorized to release it publicly. The official said a U.S. passport was involved.

The passenger was seen at the start of the flight as an "elderly Caucasian male who appeared to have young-looking hands," the Canadian Border Service bulletin said. Later in the flight, however, "the subject attended the washroom and emerged an Asian-looking male that appeared to be in his early 20s."

The document says the man had a bag that contained a "disguise kit which consisted of a silicone type head and neck mask of an elderly Caucasian male, a brown leather cap, glasses and a thin brown cardigan."

The imposter's makeover was much more elaborate than in previous cases, where suspects simply tried to match the hairdo, clothing and height of the passport holder they are trying to imitate, Hong Kong Undersecretary for Security T.K. Lai told reporters in Hong Kong on Saturday.

"This is a brand new method," Lai said.

The Canadian bulletin said the man later admitted to officials that he had boarded the flight with the mask on and had removed it several hours later. It says they believe the man and another man performed a boarding pass swap.

A Hong Kong official told the AP that the imposter is a mainland Chinese citizen who was transiting through Hong Kong. The official declined to be named because she is not authorized to release the information.

The official said the Chinese man likely escaped detection because he used his own travel documents and a genuine boarding pass when clearing immigration checkpoints in the southern Chinese city, then swapped travel papers with a collaborator in the transit lounge just before boarding the flight to Vancouver.

The man's case is being handled by Canada's Immigration and Refugee Board, but a spokesman for the agency declined comment.