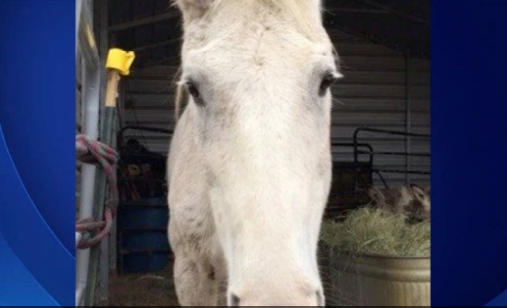 FRISCO, Texas -- A horse was given the greatest gift he could have received this Christmas: He was rescued from a kill lot, CBS Dallas/Fort Worth reported.

According to Becky’s Hope Horse Rescue in Frisco, Texas, Bubbles the horse was at a kill lot in mid-December when he ran past the gates, disregarded the commands of the kill lot employees and walked straight up to the organization’s trailer.

Becky’s Hope Horse Rescue was there to rescue some miniature donkeys. It said it couldn’t leave Bubbles behind.

“This sweet, old man won our hearts the minute he decided it was the perfect time to escape the kill lot,” the organization wrote in a Facebook post. “It seems that he thought nobody would notice him escaping if he simply mixed in with the mini donkeys!”

Bubbles is safe at Becky’s Hope, “where he continues to hang out with his mini donkey cohorts,” the organization said.

In another post, the organization said Bubbles was doing “really well” and described him as its “latest ambassador.”