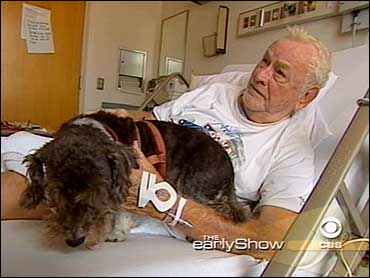 George Mitchell's dog may be one of the most unlikely heroes to emerge in the aftermath of Hurricane Katrina.

The mutt, who's nearly blind now, is a schnauzer-poodle mix and, at 19, is the equivalent of 133 in human years.

He showed up on Mitchell's doorstep in Biloxi, Miss., as a pup and has been a member of the family ever since.

Bowers met Mitchell in a Biloxi hospital, and found Frisky in Mitchell's bed with him.

"This dog has been kinda spoiled," Mitchell says. "But it paid off. It really paid off. He took care of me, he sure did. When it counted most, this dog lived up."

Frisky did more than take care of Mitchell. The unimposing four-legged friend gave Mitchell reason to live when Katrina was slamming the Gulf Coast.

"My little friend and I had a party that night," Mitchell says. "We had a big party. We spent the night treading water and swimming. … This thing (Katrina) was the monster of them all. It had to have come straight from Hell.

"About four hours after I was treading water and all, I was about ready to let go, and I felt this real peaceful feeling, like, 'This is it.' Ya know? And I was about to let go and, all of a sudden, he was on that mattress and come running to the corner of the mattress, and he kissed me and kissed me and kissed me. And it kinda snapped me out of it, and I was able to come back."

The water line is still visible on the walls. Somehow, George Mitchell managed to keep himself and his dog afloat, and whenever he started to "slip away," as he puts it, Frisky was there to nuzzle him back, Bowers says.

After what Mitchell says felt like a lifetime, the water receded enough for him, Frisky in tow, to make it out of the house and over to some stairs, and they sloshed around to the side of the house where help was waiting.

Now, the two survivors are recuperating side by side.

"He very nearly crossed the Jordan with you that night, though," Bowers says.

"Well, that's what worried me," Mitchell says. "What would happen to him? And I think that's another thing that drove me."

It was Mitchell's wife who, many years ago, ordered him to "bring that dog in and give him a proper home. He's adopted you, George."

She has since passed away, but Mitchell is convinced everything she set in motion that day was leading to that night when Katrina came.

The hurdles of vaccinating the homeless community