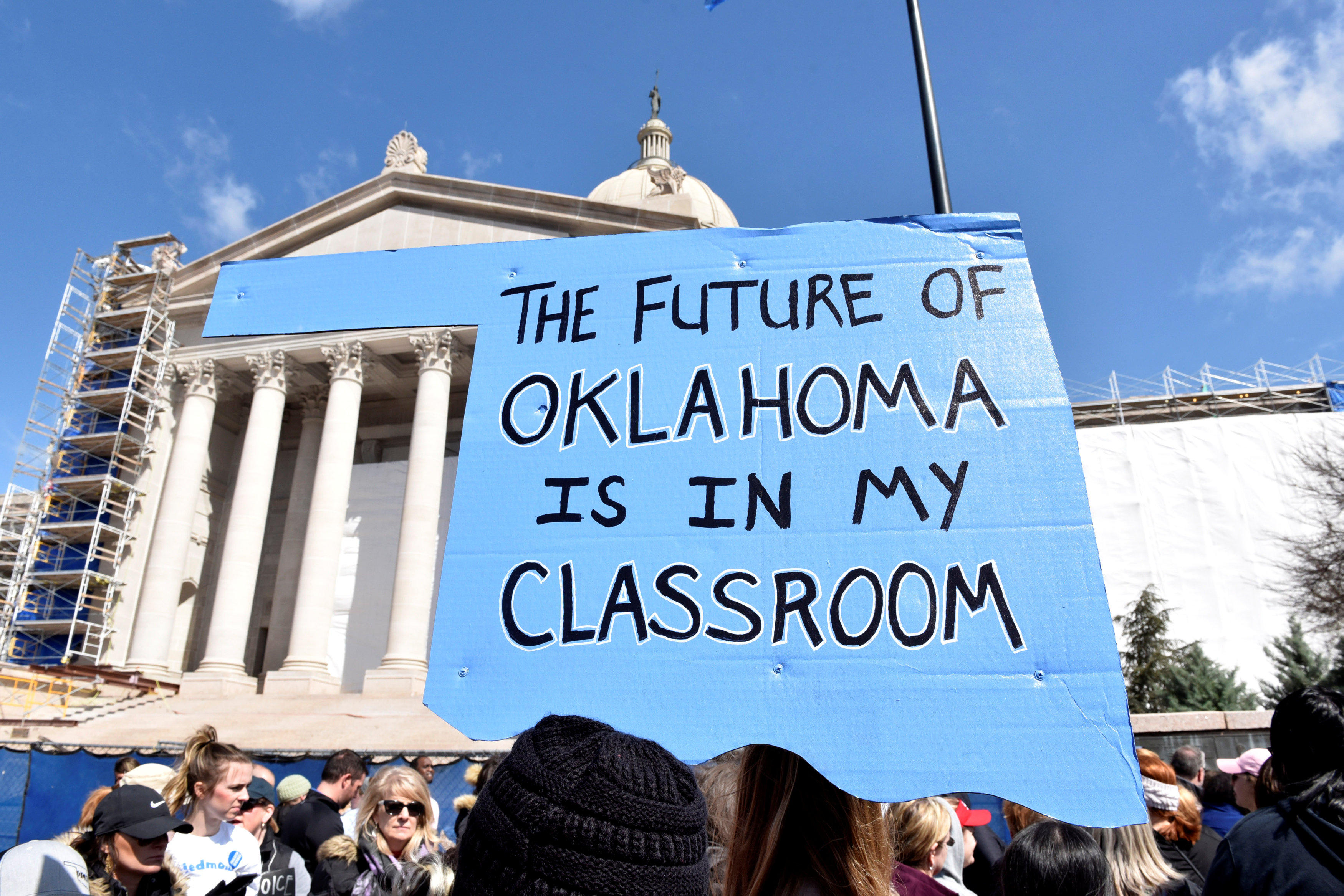 OKLAHOMA CITY -- When Oklahoma Republicans finally passed a massive tax hike for hundreds of millions of new dollars for public schools and teacher pay raises, they thought they would get a thank you. Instead, educators and their supporters marched on the Capitol. They brought pent-up with them frustration after years of budget cuts, swelling class sizes and a decade without a raise.

Their protests, and some school closures, will continue for a fourth straight day Thursday amid a movement in red states from West Virginia to Kentucky to Arizona to press for more money in classrooms.

Now, these teachers face a tough question as the walkout threatens to keep many schools closed for the rest of the week: Do they risk losing public support for their efforts, especially after lawmakers handed them much of what they asked for?

"There's always that concern, but our parents are just as frustrated as we are," said Amy Radtke, a high-school science teacher from Norman, a college town about 20 miles south of the Capitol in Oklahoma City, where schools will remain closed for the rest of the week.

Ashleigh Hardwick, a single mom whose daughter attends elementary school in Norman, said she's had to rely on friends and family to watch her daughter while she works at a local florist shop, but that so far she's standing behind the teachers.

"It's been a hassle, that's for sure," said Hardwick, who said she may have to take a day off work without pay. "But if it's going to better my child's future ... I think I can handle missing a few days of work."

Still, some question why teachers are continuing to stay off the job after lawmakers approved new money for schools and raises. On Tuesday, Oklahoma Governor Mary Fallin signed a bill giving teacher-support staff, like teachers' aides and janitors, a $1,250 raise. Last week, she signed a measure that gave teachers a $6,000 pay raise, but only added an additional $50 million to school funding.

Preston Leehan, a construction worker who was surveying gas lines Wednesday in Oklahoma City, said the $6,000-per-year raise that teachers received sounds like a pretty good deal for a public-sector employee.

"I don't know of police or firefighters who strike after they get a $6,000 pay raise," Leehan said.

Even within the teachers' own ranks, there are divisions.

Ginger Tinney, the executive director of the Professional Oklahoma Educators, which represents about 12,000 teachers, said she believes public support for teachers will wane if schools remain closed.

"Our students need their teachers," Tinney said. "I think the public is with us, but it could erode the longer it goes."

Many teachers already are back at work, especially in rural communities where local boards didn't vote to shut down. Still, schools in the state's largest districts remain shuttered, including Oklahoma City, Tulsa and many suburban communities. Thousands have thronged the Capitol for three straight days seeking more money for the classrooms.

That has proved frustrating for some GOP leaders, especially those who broke with party orthodoxy to raise taxes to pay for teacher raises.

Republican Gov. Fallin on Wednesday called on the teachers to return to classrooms. In one interview Tuesday, she likened striking teachers to "a teenage kid that wants a better car."

"That was kind of a slap in the face," said Donita Goforth, an elementary art teacher from Grove, Oklahoma, who drove three-and-a-half hours to rally at the Capitol on Wednesday.

Rep. Earl Sears, a Republican from Bartlesville and a retired school administrator, said he voted for the tax hike and supports teachers' efforts, but acknowledged they run the risk of losing public support the longer that schools remain closed.

"I think there were some members who felt if we passed this, everything will be fine and everybody will move on," Sears said, "but it's really kind of unlocked a lot of emotions."

Teachers now are pushing lawmakers to pass several more revenue-raising measures, including one that eliminates the income tax deduction for capital gains that would generate about $120 million annually. Another to expand tribal gaming would bring in about $20 million, but both of those measures face broad GOP opposition.

It's still not clear if the passage of those measures, or another to require certain online vendors to pay sales tax, will be enough to placate teachers and get them to return to the classroom.

"We just need to keep working, wrap this thing up," Sears said.

Teachers have turned into lobbyists, crowding hallways and waiting in line to meet with almost every state lawmaker. Liz Hoggett and her fellow teachers from Norman public schools went office to office, leaving notes and letters for legislators, asking for more school funding. They waited more than an hour to meet with their state senator, but he had to leave for a roll call vote. The third generation teacher says she's frustrated, but doesn't plan to give up.

"I want him to hear that we are not going anywhere," she said. "We're doing this for our kids."