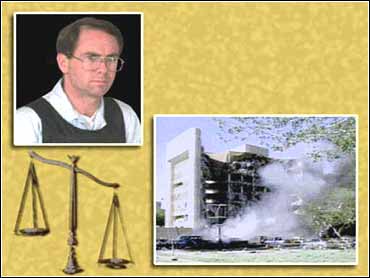 Saying that he's willing to "do the right thing," as opposed to taking an easier course, Oklahoma County District Attorney Wes Lane has turned down an offer from Oklahoma City bombing conspirator Terry Nichols to end his appeals and accept a federal life sentence rather than face a state trial.

Lane had been weighing whether to drop the controversial case since taking over in June from Bob Macy, who filed the state murder charges in 1999 to fulfill a public pledge to win a death penalty conviction against Nichols.

"Certainly, at the very heart of our justice system is the principle of accountability and responsibility for those who are alleged to have committed the most serious crimes. With that in mind, I have decided that the state of Oklahoma will proceed with the prosecution of Terry Nichols," Lane said.

Lane made the announcement at the Oklahoma City National Memorial, which marks the site where a truck bomb detonated by Timothy McVeigh killed 168 people in April 1995.

Nichols, 46, was sentenced to life in prison without parole after a federal jury in Colorado convicted him of helping plan the bombing that gutted the Alfred P. Murrah Federal Building and killed eight federal agents. McVeigh was executed in June on a federal conviction.

The state case against Nichols has been mired in pretrial court motions and no trial date has yet been set. Polls have found public opinion consistently split over whether the case is too expensive and too traumatic to pursue, and state legislators briefly blocked funding for the case for those reasons before a judge freed up the funds.

In a letter to the editor to the Tulsa World, Nichols' attorney, Brian Hermanson, said Nichols was willing to end his appeals and accept a federal life sentence in order to avoid the state trial.

Lane said he wanted to ensure that Nichols is held accountable for the Oklahoma City bombing no matter what happens with Nichols' appeal of his federal conviction.

"I simply do not know what might loom out there on the legal horizon, which once revealed, would place Terry Nichols' federal conviction in jeopardy," he said. "I know there will be good lawyers who will disagree with me on this.

"However, if they are wrong they will never have to face the victim's family and survivors, but I will.

"Accountability with the laws of Oklahoma demand that we stay the course."

He said he was concerned with how survivors of the bombing and family members would feel about further prosecution of Nichols.

"I have considered this at great length and frankly this perhaps above everything has been my greatest concern," he said. "I truly wish that I believed in my heart of hearts that I have another course of action available to me at this time."

It's more a legal decision than political one, said CBSNews.com Legal Consultant Andrew Cohen, "because I think politically Lane might have been better served not spending the time and money on this. State prosecutors are going forward with the case as a back-up plan, a safety net, because they are genuinely concerned about what can go wrong legally for the government as Nichols' federal appeals continue."

The fear is that the U.S. Supreme Court may rule that the belatedly-released FBI documents would have made a difference at Nichols' federal trial, and order his sentence reduced.

"The D.A. understandably wants to keep the heat on Nichols until the federal issues are resolved, Cohen said, "and if they are resolved to the feds' satisfaction, I wouldn't be surprised at all if this state case went away and went away quickly, given how much it will cost, how much time it will take and the emotional toll it will cost victims and survivors."

There was mixed reaction from survivors and the families of the victims.

Kathleen Treanor, who lost her 4-year-old daughter and her husband's parents in the bombing, said she wanted to shout "Yes!" when she heard about Lane's decision. She said she would have fought any other decision.

"I think in the sense of justice I think I'm willing to put on my armor again and do battle just one more time for the sake of my daughter and my in-laws."

But six years and 17 surgeries out from the bombing, recovering survivor Patty Hall told CBS News Correspondent Bob MacNamara she doesn't want to revisit all the death and detail of another trial.

"I'd just like to see him go to prison for the rest of his life, and why should he get the easy way out?" she said. "The death penalty, uh, uh. I don't want to see that."