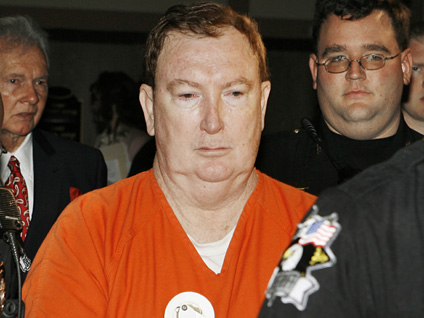 (CBS/KWTV/AP) - OKLAHOMA CITY - Oklahoma City pharmacist now faces life in prison with the possibility of parole after being found guilty of murder for the death of a 16-year-old who tried to rob his store.

Confronted by two holdup men in May 2009, Ersland pulled out a gun, shot one of them in the head and chased the other away. The drugstore's security camera then filmed Ersland as he went behind the counter, got another gun, and pumped five more bullets into the wounded Antwun Parker as he lay on the floor.

The 59-year-old had been hailed as a hero for protecting two fellow employees.

The Ersland jury began deliberations around 1:00 p.m. Thursday and returned with a the guilty verdict around 4:30 p.m.

The verdict stunned the courtroom. Ersland, who many hailed as a hero, sat emotionless as the guilty verdict was read. People sitting behind him were noticeably upset.

Parker's mother and her sisters were inside the courtroom most of the trial, and burst out of the room when the verdict was read. They clung to each other and cried in the hallway in an outpouring of emotion.

Erlsand was led out of the courtroom in handcuffs with deputies surrounding him. The wife of the Reliable Pharmacy owner was seen crying as she left.

She was visibly stunned that the jury chose to find Ersland guilty of murder instead of the lesser charge of manslaughter.

Judge Ray Elliott refused to lift the gag order so the prosecution, the defense, and the jury are not allowed to comment on the verdict. But we do know the jury had asked to see the surveillance video of the robbery and shooting one more time before they went up to deliberate.

Coverage of Jerome Ersland on Crimesider