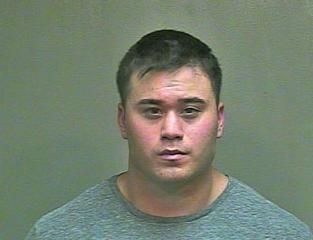 OKLAHOMA CITY -- An Oklahoma City police officer was arrested Thursday and charged in relation to a string of violent sex crimes that investigators say he committed while on duty, reports CBS affiliate News 9.

Daniel Holtzclaw was handcuffed at 3 p.m. outside a Gold's Gym location.

He has been charged with rape in the first degree, rape by instrumentation, three counts of forcible sodomy, two counts of sexual battery and two counts indecent exposure, News 9 reports.

Oklahoma City police have identified seven victims, but have only collected statements from six females.

Police say the victims, black females, aged 34 to 58, were allegedly attacked between February and June. Many of the crimes occurred during traffic stops, at the locations of those stops, but some were transported to another location during the alleged attacks.

News 9 interviewed a 57-year-old grandmother who says she was one of the victims. The woman says she feels vindicated by the arrest of Oklahoma City police officer and she is glad that other women have come forward.

She says she got the news of the arrest while she was at work and came home to find the picture of the man she says violated her all over the news.

"My heart started beating fast, my hands started shaking," she said. "Only thing I could do was turn my head to keep the tears away. Nothing else would come to my mind but that's him!"

Police Chief Bill Citty says Holtzclaw has been with the department since September 2011.

Citty says investigators started reviewing previous stops by Holtzclaw after they received a complaint in June.

"It taints all of us, and the officers know that and they take it very personally," said Citty. "And it angers us that one of our people, one of our officers, that people trust to keep them safe, is doing just the opposite."

"We have some good officers on the force, but yet as we see today, we have a problem when it comes to African Americans and police officers," Oklahoma NAACP President Anthony Douglas said.

Holtzclaw was booked into the Oklahoma County jail on a $5 million bond.

The first-degree rape charge alone can carry a sentence of five years to life or life without parole.