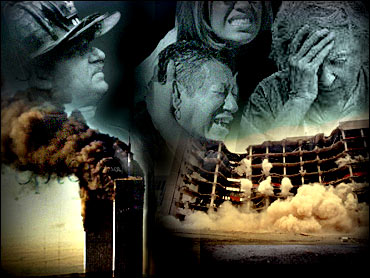 Eight years ago today, just a few minutes before 9 o'clock in the morning in Oklahoma City, Army veteran-turned-anti-government-activist Timothy McVeigh lit a fuse in his rented Ryder truck and walked away from its parking spot in front of the open-for-business Alfred P. Murrah federal office building. A few minutes later, at 9:02 a.m., thousands of pounds of fuel oil and fertilizer inside the truck exploded. The Murrah building was devastated. One hundred and eighty-six people were killed. Hundreds more were wounded. It was, at the time, the largest act of domestic terrorism in the nation's history.

Eight years later, the Oklahoma City bombing can only be viewed through the prism of a far more massive act of terrorism-- the attacks on the World Trade Center and the Pentagon. The death toll from 9-11-01 is roughly 17 times that of the death toll of 4-19-95. And whereas McVeigh's attack in Oklahoma represented the effective end to an active "patriot" movement in America, Osama bin Laden's attack on New York and the Pentagon represented merely the beginning of an all-out blitz against terrorism; a fight that already has changed American society far more than the Oklahoma City bombing ever did.

For the survivors and family members of the victims, the two terror events have brought the same mix of sadness, despair, grief, rage, and resolution. But for the rest of America, it's not unfair to say that the Oklahoma bombing is perceived now as an anomaly-- a mindless and brutal assault on men, women and children by a delusional paranoid-- whereas the 9-11 attack is perceived now as sign that we are all vulnerable, all of us, whether we live near the ocean or on the prairie. To observe the difference is not to dismiss what happened when McVeigh lit that fuse. Indeed, to observe the difference ought to make us appreciate anew just how monumental was the 9-11 hijacking plot and its result. It made even the massive blow in Oklahoma City-- a blow to our pysche as well as to our persons-- look puny in comparison.

So if it doesn't seem quaint, the Oklahoma City bombing and its aftermath in retrospect seem awfully simple and neat. We quickly found out who did it and why and those who might have been disposed to help the bombers didn't vow to continue the fight. We captured McVeigh himself just an hour or so after the blast and Terry Nichols, McVeigh's helper, just a few days later. We brought McVeigh and Nichols to trial in a federal court in Denver and we gave them justice. It wasn't perfect-- remember the FBI files controversy?-- but it wasn't too messy, either. Although we passed a few new anti-terror laws, for example, we didn't need to alter the traditional checks and balances between the executive and judicial branches; an unsettling balancing that has come quickly since 9-11-01.

What's really remarkable, in retrospect, if how respectful both McVeigh and Nichols were toward the justice system despite their professed hatred for the power of the government. Both Oklahoma City bombing defendants politely observed the rules of the legal system during their trials. There were no outbursts; no angry exchanges with the judge; and no indefinite detentions. Compare their behavior with the behavior of Richard Reid, the shoe-bomber who threatened his judge, or Zacarias Moussaoui, the alleged Al Qaeda operative, who routinely refuses to play by the rules of the game even as his judge tries to ensure his constitutional rights. These subsequent "faces of terror" make McVeigh and Nichols seem like choir boys.

Anyway, McVeigh now is gone-- executed by the feds three months to the day before the September 11, 2001 attacks. I have often wondered whether he would have cheered Al Qaeda's audacity and brazeness from his jail cell or whether he would have deplored it. And I have wondered recently whether McVeigh-- had he not gone sour-- would have returned to the Gulf to fight a second battle against Iraq like so many of his fellow Gulf War I vets. McVeigh, remember, was a brilliant soldier during the 1991 conflict; a decorated gunner on a Bradley fighting vehicle. Had he kept it together-- had he not allowed the bitterness over the Branch Davidian conflagaration to consume him-- would we be seeing features about McVeigh on the news as he fought his way into Baghdad?

Nichols, too, has all but passed from our lives in the past eight years. He was sentenced to prison for life after a federal trial and now is waiting to find out whether Oklahoma officials are going to try him for murder on state charges. Eight years later, a second Nichols' trial is in limbo because no one in the state wants to pay for his court-appointed attorneys. And even if he were convicted in Oklahoma and sentenced to death, no federal judge would permit his execution for the same reason that the federal courts took the bombing trials away from Oklahoma in the first place-- undue prejudice toward the defendants.