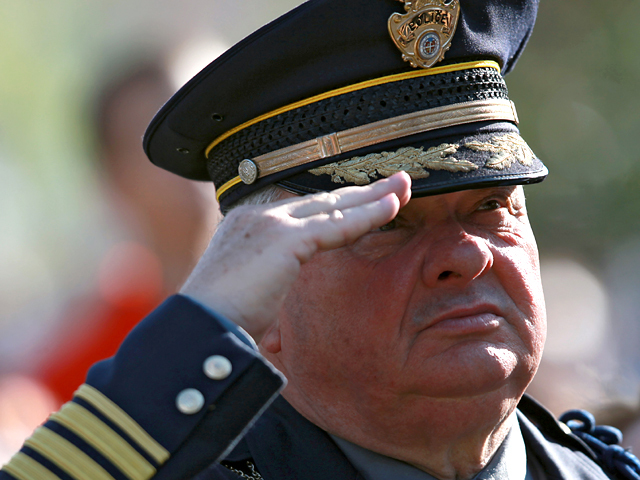 OKLAHOMA CITY - Antonio Cooper Sr. walked across a field of empty chairs that represent the victims of the Oklahoma City bombing, occasionally stopping to read names inscribed in glass panes as he searched for the one dedicated to his 6-month-old son, Antonio Cooper Jr.

"I feel it's a necessity to be here," Cooper said Tuesday as he strapped a colorful bouquet of spring flowers to the chair bearing his son's name on the 16th anniversary of the bombing of the Alfred P. Murrah Federal Building, the worst domestic terror attack in U.S. history and the deadliest on U.S. soil before the Sept. 11, 2001, attacks.

The boy's grandmother, Wanda McNeely, wept softly as she placed a beige stuffed bear on the metal chair that stands on the federal building's former site. McNeely said the death of her grandson still evokes strong emotions and observing the anniversary of the April 19, 1995, attack doesn't get easier with the passing years.

"It weighed heavily on my heart," she said as tears streamed down her cheeks. "But I couldn't tear myself not to come."

Cooper wore a red T-shirt bearing the smiling image of his young son that read "Our Lil' Angel" as he and more than 300 other people attended ceremonies at the Oklahoma City National Memorial & Museum on the anniversary of the bombing that killed 168 people, including his son and 17 other children who were being cared for at a day care center on the building's second floor.

"You have to move forward. You try not to stay on that somber mood," he said. "You reflect on what could have been."

Nearby, Jannie Coverdale paused near the chairs dedicated to her two grandsons, 5-year-old Aaron Coverdale and 2-year-old Elijah Coverdale, and said observing the anniversary of their deaths felt "just like it was yesterday."

"It gets worse because you wonder what they would be like now, what they would look like," she said. Each of her grandsons might have been at the beginning of their college careers on the way to becoming doctors or lawyers, she said.

"You never can tell," she said.

Following the ceremony, its principal speaker, Gov. Mary Fallin, walked among the chairs and said it was meaningful for family members of bombing victims return to the memorial each year to remember their loved ones and reconnect with others with whom they have a shared grief.

"It's important that we never forget," Fallin said.

Fallin told those at the ceremony that the memorial is a testament to the sacrifices of those killed and injured in the blast as well as rescue workers who worked tirelessly to rescue survivors and recover the dead.

"It's a reminder of so many people who stepped forward that day," the governor said. "It's that spirit that helps comfort us. What was meant for evil has been used for good."

A Marine Corps honor guard placed a wreath between chairs dedicated to Capt. Randolph A. Guzman and Sgt. Benjamin LaRanzo Davis, who were killed in the Marine Corps recruiting office on the federal building's sixth floor.

"It means a lot to me and my family," said Guzman's brother, Rudy Guzman, who traveled from his home near San Francisco to attend the ceremony. "It's just a big honor."

Paul Howell accompanied his grandchildren as they visited the chair dedicated to his daughter, Karan Howell Shepherd, who worked in the Federal Employees Credit Union on the building's third floor. Howell said caring for his daughter's children has helped him overcome the shock and grief of her death.

"It works in chapters," he said. "I've tried to take care of her kids. I've got to be strong for my kids and grandkids."

Federal prosecutors said Army veteran Timothy McVeigh planned the bombing as revenge for the deadly standoff between the FBI and Branch Davidians in Waco, Texas, that killed more than 70 people on April 19, 1993 — exactly two years earlier.

McVeigh was convicted on federal murder and conspiracy charges in 1997 and executed in 2001.

His Army buddy, Terry Nichols, was convicted on federal and state bombing-related charges and is serving multiple life sentences in a federal prison.