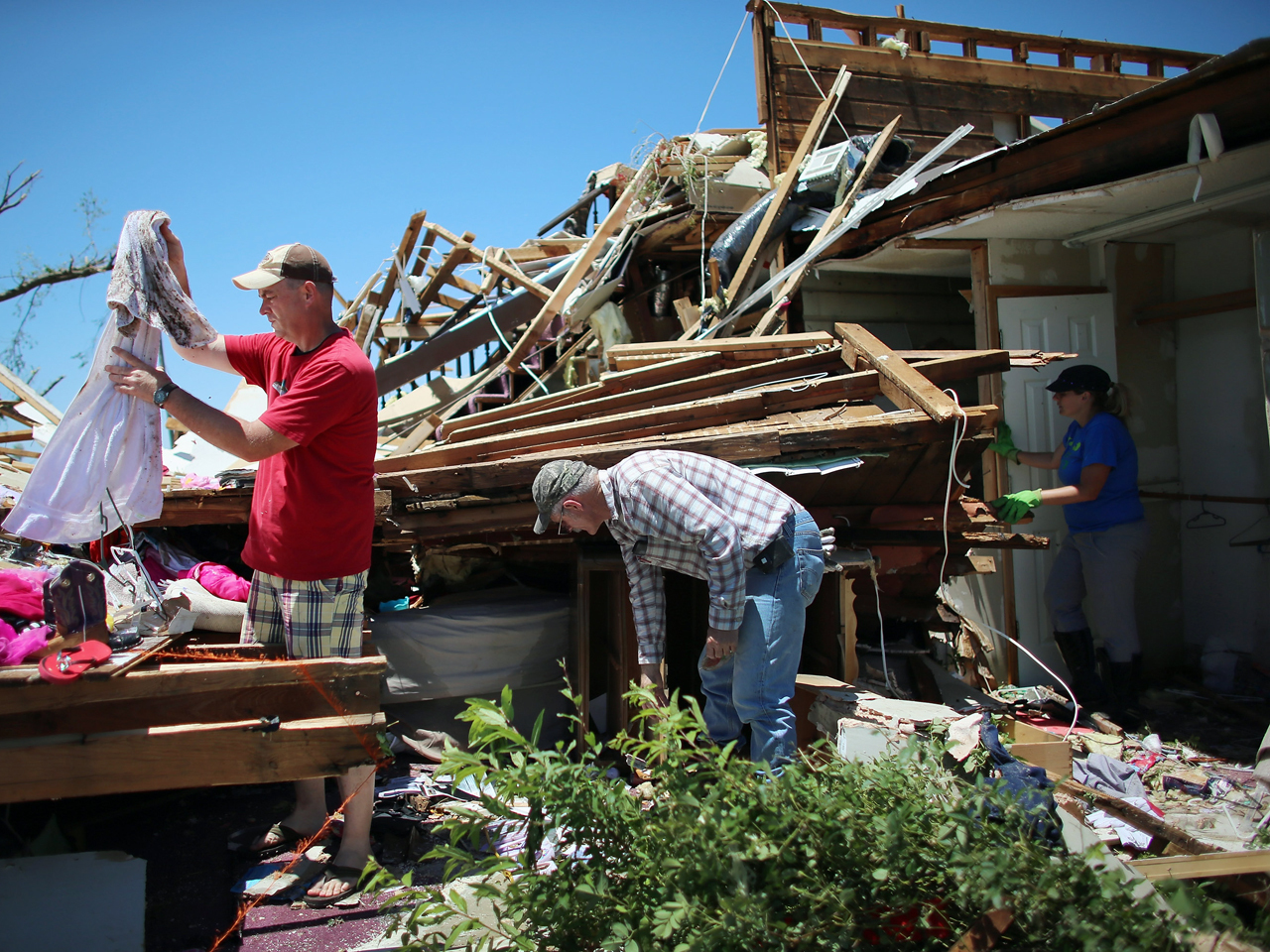 OKLAHOMA CITY It's a warning as familiar as a daily prayer for Tornado Alley residents: When a twister approaches, take shelter in a basement or low-level interior room or closet, away from windows and exterior walls.

At the restaurant of a livestock auction barn in business for more than two decades in rural El Reno, Okla., waitress Tracy Szymanski saw three tornadoes approaching Friday. She and six other employees ran to hide in a closet beneath some stairs.

"That's when I knew we had to go, and we all took off and got in that closet and prayed," Szymanski told CBS News correspondent Anna Werner. "I thought we were going to die. I thought we were gonna get sucked out and die, and they'd find us somewhere in the pasture. I don't want to ever go through another one like this. Ever."

But with the powerful devastation from the May 20 twister that killed 24 and pummeled the Oklahoma City suburb of Moore still etched in their minds, many Oklahomans instead opted to flee Friday night when a violent tornado developed and headed toward the state's capital city.

It was a dangerous decision to make.

Interstates and roadways already packed with rush-hour traffic quickly became parking lots as people tried to escape the oncoming storm. Motorists were trapped in their vehicles — a place emergency officials say is one of the worst to be in a tornado.

"It was chaos. People were going southbound in the northbound lanes. Everybody was running for their lives," said Terri Black, 51, a teacher's assistant in Moore.

After seeing last month's tornado also turn homes into piles of splintered rubble, Black said she decided to try and outrun the tornado when she learned her southwest Oklahoma City home was in harm's way. She quickly regretted it.

When she realized she was a sitting duck in bumper-to-bumper traffic, Black turned around and found herself directly in the path of the most violent part of the storm.

"My car was actually lifted off the road and then set back down," Black said. "The trees were leaning literally to the ground. The rain was coming down horizontally in front of my car. Big blue trash cans were being tossed around like a piece of paper in the wind.

"They had no place to go, and that's always a bad thing. They were essentially targets just waiting for a tornado to touch down," Randolph said. "I'm not sure why people do that sort of stuff, but it is very dangerous. It not only puts them in harm's way, but it adds to the congestion. It really is a bad idea for folks to do."

At least nine people were killed in Friday's storms, including a mother and her baby sucked out of their car as a deadly twister tore its way along a packed Interstate 40 near the town of El Reno, about 30 miles from Oklahoma City.

A 4-year-old boy died after being swept into the Oklahoma River on the south side of Oklahoma City, said Oklahoma City police Lt. Jay Barnett. The boy and other family members had sought shelter in a drainage ditch.

More than 100 people were injured, most of those from punctures and lacerations from swirling debris, emergency officials reported.

Oklahoma wasn't the only state to see violent weather on Friday night. In Missouri, areas west of St. Louis received significant damage from an EF3 tornado that packed estimated winds of 150 mph. In St. Charles County, at least 71 homes were heavily damaged and 100 had slight to moderate damage, county spokeswoman Colene McEntee said.

Tens of thousands were without power, and only eight minor injuries were reported. Gov. Jay Nixon declared a state of emergency.

Northeast of St. Louis and across the Mississippi, the city of Roxana was hit by an EF3 tornado as well, but National Weather Service meteorologist Jayson Gosselin said it wasn't clear whether the damage in both states came from the same EF3 twister or separate ones.

Back in Oklahoma, Amy Williamson, who lives just off I-40 in the western Oklahoma City suburb of Yukon, said when she learned the tornado was moving toward her home, she piled her two young children, baby sitter and two cats into her SUV.

"We felt like getting out of the way was the best idea," Williamson said. "It was 15 minutes away from my house, and they were saying it was coming right down I-40, so we got in the car and decided to head south."

Williamson said she knows emergency officials recommend taking shelter inside a structure, but fresh in her mind was the devastation of the Moore tornado. Seeing homes stripped to their foundation made her think that fleeing was the best idea, she said.

"I'm a seasoned tornado watcher ... but I just could not see staying and waiting for it to hit," she said. She ended up riding out the storm in a hospital parking garage.

On Saturday, muddy floodwaters stood several feet deep in the countryside surrounding the metro area. Torrential downpours followed for hours after the twisters moved east — up to 7 inches of rain in some parts — and the city's airport had water damage. Some flights resumed Saturday.

The Oklahoma County Sheriff's Office said the body of a man who went missing from his vehicle early Saturday near Harrah, east of Oklahoma City, was found later in a creek by deputies. Roadways around the area were crumbling because of water, especially near an intersection in northeastern Oklahoma City and in Canadian County south of I-40, between Mustang and Yukon.

When the storm passed between El Reno and Yukon, it barreled down I-40 for more than two miles, ripping billboards down to twisted metal frames. Debris was tangled in the median's crossover barriers, including huge pieces of sheet metal, tree limbs and a giant oil drum. The warped remains of a horse trailer lay atop a barbed-wire fence less than 50 yards from the highway.

The Oklahoma Corporation Commission reported more than 91,800 homes and businesses across the state remained without power Saturday.