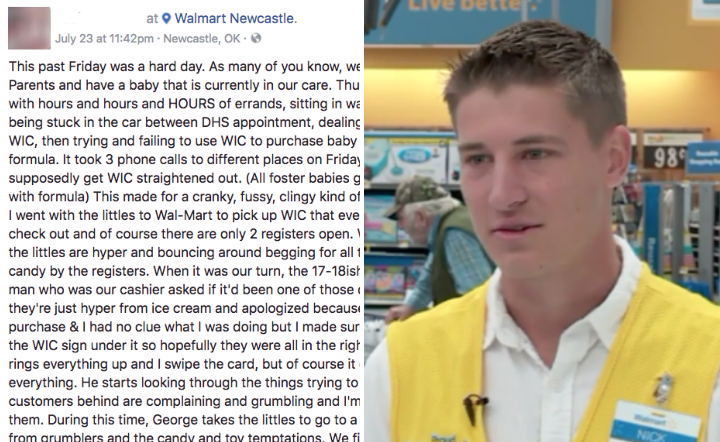 It was late on a Friday night and Nicholas Tate was nearing the end of his shift at Walmart when the line at his checkout counter started grow.

The 20-year-old cashier from Newcastle, Oklahoma, patiently waited as each customer placed their items on the conveyor belt. A woman surrounded by three children apologized as she stepped up to the counter.

"Is it one of those days?" Tate asked, smiling as kids bounced around behind her.

The woman explained she was fostering a baby and had to use WIC, part of a federal program that provides assistance for low-income families with children, to pay for some of the items. She had set up WIC earlier that day, and had never used it before.

"She had a good amount of items and most of them went through, but she apparently didn't have the right formula and it wouldn't go through," Tate told CBS News. "We had to run a separate transaction for the rest."

The line was growing longer as Tate rang up the rest of the groceries.

"[There were] more customers, more grumbling and dirty looks as they moved to the other lane and I'm frustrated and trying not to cry," the customer, who wishes to remain anonymous, wrote in a Facebook post. "At this point, a lady we know came up and asked why I was causing so many problems. I told her I was just failing as a foster mom because I can't figure out WIC and almost burst into tears right there."

But Tate remained calm and called a manager over for help, ready to try the transaction again.

"I already had my card out at that point. I felt like God was telling me to pay for it," Tate explained. "The second it didn't work I swiped my card."

"What are you doing?" the woman asked, her eyes tearing up.

Tate paid for $60 worth of her groceries -- and he says it was worth every penny.

"I don't remember everything he said to me after that but I do know he told me that I wasn't failing and that what we were doing was an amazing thing," the woman explained.

Tate says he was just doing the right thing.

"When we feel like God is telling us to do something -- how many times do we say no? In that moment, without a doubt, he was telling me to pay, telling me these people are in need, to help them," Tate said.

The woman never even saw Tate's name tag and regretted not being able to personally thank him. So, she took to Facebook to share the heartwarming story in hopes of finding him.

Hundreds of people shared the message and eventually the foster mom and Tate were able to connect.

"I have been able to get into contact with this young man... and thank him again as well as his mom and tell her how incredibly blessed we were by her son and thank her for raising such an exceptional young man," she wrote. "Additionally multiple managers from Wal-Mart have contacted me regarding this issue to figure out who it was, wanting to help make it right and help however they can. As well as someone from WIC."

Tate said he never expected their story to go viral, but he's glad it did.

"It made my heart really happy," Tate said. "It confirmed that I'm doing what God wants me to do."