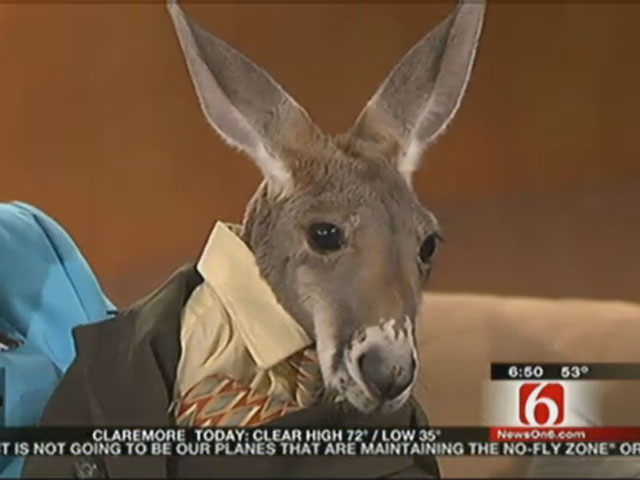 But officials in Broken Arrow, east of Tulsa, say the kangaroo is in violation of a city ordinance banning exotic and wild animals.

In an interview with CBS affiliate KOTV, Carr said she is not trying to break the law and in fact brought the animal to the attention od the city.

Carr is seeking an exemption from the Broken Arrow City Council to keep the 25-pound great red kangaroo that she cares for much like a child. Irwin - named after "Crocodile Hunter" Steve Irwin - rides in a car seat, is dressed in a shirt and pants each day and is rarely away from his doting caretaker.

At the advice of her therapist, Carr began volunteering at a local animal sanctuary, where she met the animal, then just a baby. Less than a week later, the kangaroo ran into a fence, fracturing his neck and causing severe brain damage.

Carr volunteered to take the animal home and, while nursing him back to health, developed a bond. Irwin cannot stand or walk on his own, although he is slowly gaining back mobility and can hop three or four times in a row with assistance, she said.

"Irwin will not live if I have to give him up," Carr said, adding that she would rather leave town. "I can't imagine a day living without him."

Native to Australia, healthy male great red kangaroos can grow up to 7 feet tall, weigh more than 200 pounds and bound 25 feet in a single leap. But because of his accident, Irwin isn't expected to get larger than 50 pounds.

Carr told KOTV that Irwin will be mobile, but that "he won't get anywhere very fast."

His veterinarian, Dr. Lesleigh Cash Warren, wrote in a letter to the council supporting Carr's request to keep him.

Neutering has also lessened any chance he will become aggressive. Carr's therapist certified the animal as a therapy pet under the Americans with Disabilities Act.

Carr, who is unable to work because of her health, makes sure the animal never leaves her side for more than an hour, often accompanying her on errands and going out to eat.

Broken Arrow Mayor Mike Lester said he worries what could happen if Irwin is able to regain full mobility. The council last week delayed considering the issue until an April 19 meeting, to give City Attorney Beth Anne Wilkening and other staff time to research the issue.

"There's just a myriad of things we need to consider," Lester said.

Every exception made sets a precedent, and the council must take that into consideration, Wilkening said. The council may decide to create an exotic animal review committee that would look at each animal on a case-by-case basis, he said.