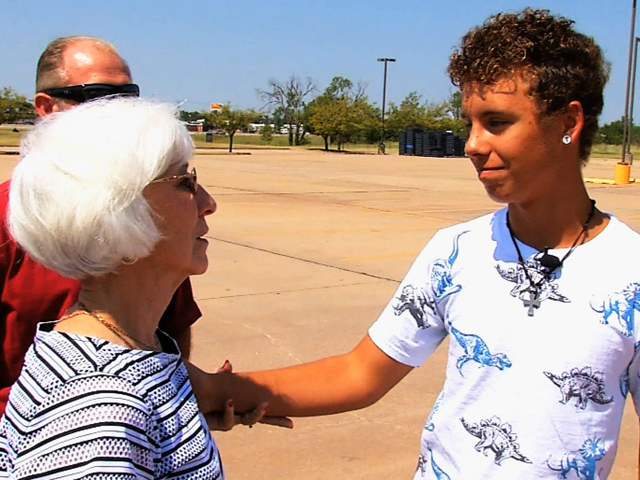 (CBS News) OKLAHOMA CITY -- Seventy-eight-year-old Tona Herndon of Bethany, Okla., was vulnerable in every way. Her husband of 60 years had died just two weeks earlier. Her eyes were so clouded with grief, she never saw it coming.

"You know, I really didn't even know anything was going wrong until I was halfway in the car," she says.

She was mugged as she visited her husband's grave.

The mugger got away with her purse and $700, but not for long. Police caught him, and the news put his mug shot on TV.

Fifteen-year-old Christian Lunsford says the first time he saw the picture, he recognized it "in detail." He had no doubt that it was his dad.

Christian says his parents divorced when he was two, and his dad has been mostly absent ever since. Last time he heard from him was a few weeks ago. His dad gave him $250 for a band trip Christian really wants to go on.

But that's been the extent of his parenting recently. In fact, over the years, Christian says his dad has been in and out of jail more than half a dozen times.

The apple wants nothing to do with the tree. Which is why, after Christian heard about his dad's latest crime, he reached out to the victim and asked to meet her in a church parking lot.

Christian says he just had to tell her he was sorry about what happened.

"It needed to be done," he says. "She needed an apology from somebody. If I didn't apologize, who would?"

"I thought that was so, so precious," Tona says. "Any 15-year-old boy who has that much conscience is extraordinary."

And Christian was just getting started.

Never mind that it wasn't his crime. He paid the debt.

"I accepted the money back," Tona says. "And it was mine to do with what I wanted."

Which brings us the best part of this story.

"I want you to take your band trip," Tona told Christian.

She gave it all back to him for his band trip.

In the end, no money changed hands in that church parking lot, but they each got something tremendously valuable from the other.

"I feel more like my life still has a purpose," Tona says.

"You're not who your parents are," Christian says. "Even if they do raise you, you can become whatever you want to be."