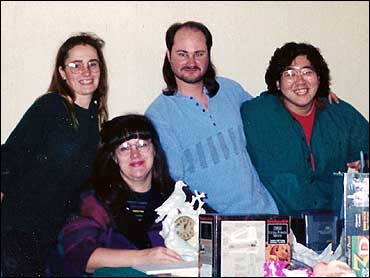 An Oklahoma man was executed Tuesday for throwing a firebomb that killed a university student from Japan more than 10 years ago .

Terry Lyn Short was injected with a lethal combination of three chemicals at the Oklahoma State Penitentiary and was pronounced dead at 6:08 p.m., Oklahoma Department of Corrections spokesman Jerry Massie said.

A short, round-faced man wearing large glasses, Short was strapped to a stainless steel gurney and covered with a white sheet when the curtains were raised inside the execution chamber, allowing about a dozen witnesses to see him.

Short raised his head and acknowledged the presence of several family members, but declined an opportunity to deliver his last words into a microphone that dangled over his head.

"I have nothing to say," Short said.

Short's sister, Trina Hartshorn, sobbed quietly as the execution got under way.

Short appeared to stop breathing, and the color slowly drained from his face as he laid still on the gurney.

"We had good conversations, and he had peace with God," Hartshorn said after the execution. "He's in a better place."

The 47-year-old Short was the first person executed in Oklahoma since Aug. 21.

Executions had been put on hold across the country as the U.S. Supreme Court considered a challenge to the lethal injection procedure.

Short was convicted of killing 22-year-old Ken Yamamoto more than 13 years ago. Yamamoto lived one floor above Short's ex-girlfriend and died after Short threw a gasoline-filled bottle into her apartment that ignited the building.

Investigators believe Yamamoto, a senior art major at Oklahoma City University, was sleeping when the blaze erupted in the early morning hours on Jan. 8, 1995, at the Royal Chateau Apartments in south Oklahoma City. By the time he awoke and tried to escape, the entire unit was engulfed in flames.

When rescue workers reached Yamamoto, his body was covered with severe burns. He died less than two days later at an Oklahoma City hospital.

Robert Hines, who was in the downstairs apartment with Short's ex-girlfriend, suffered severe burns over much of his arms and upper body. Hines witnessed the execution and said he felt justice was served.

"I'm sure he's going to pay for it now, wherever he goes," said Hines, who said he endured months of agonizing medical treatment and four operations as a result of the burns.

Yamamoto came to Oklahoma as an exchange student from Japan in 1989 and graduated high school in Del City, an Oklahoma City suburb.

His host family in high school remembered Yamamoto as a hardworking, dedicated student who was shy when he first arrived in Oklahoma, but quickly learned English and grew to love America.

"He bleached his hair blonde. He wore stars-and-stripes shirts. He loved rock 'n' roll," Myles Martin, Yamamoto's host brother, said during a clemency hearing last month. "He did not deserve to die, and what a horrible way to die."