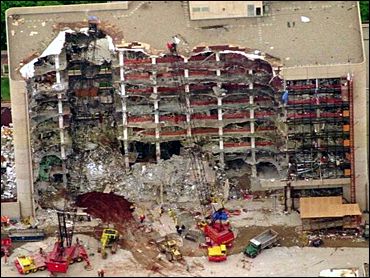 The FBI believed Timothy McVeigh tried to recruit additional help in the days before the deadly 1995 Oklahoma City bombing and gathered evidence that white supremacist bank robbers may have become involved, according to government documents never introduced at McVeigh's trial.

The retired FBI chief of the Oklahoma City investigation, Dan Defenbaugh, said he was unaware of some evidence obtained by The Associated Press and that the investigation should be reopened to determine whether the robbery gang was linked to McVeigh.

The evidence never shared with Defenbaugh's investigators or defense lawyers includes documents showing the Aryan Republican Army bank robbers possessed explosive blasting caps similar to those McVeigh stole and a driver's license with the name of a central player who was robbed in the Oklahoma City plot.

"If the evidence is still there, then it should be checked out," said Defenbaugh, who reviewed the documents at the request of the AP. "If I were still in the bureau, the investigation would be reopened."

The bombing killed more than 160 people and McVeigh was put to death for it in 2001. His co-defendant, Terry Nichols, will stand trial in Oklahoma next week on state charges that carry the death penalty.

Peter Langan, one member of the robbery gang, told the AP he plans to testify at Nichols' trial and that federal prosecutors several years ago offered and then withdrew a plea deal for information he had about the Oklahoma City bombing.

Langan said at least three fellow gang members were in Oklahoma around the time of the bombing and one later confided to him that they had become involved. The gang "had some liability problems as it related to Oklahoma City," Langan alleged in a phone interview from federal prison where he is serving life sentences for the robbery spree involving nearly two dozen Midwest banks in the 1990s.

McVeigh's ex-lawyer said the evidence obtained by the AP is the strongest to date to show what he has argued for years — that the bombing conspiracy may have involved more people than McVeigh and Nichols.

"I think these pieces close the circle, and they clearly show the bombing conspiracy consisted probably of 10 conspirators," attorney Stephen Jones said. "They (government officials) simply turned their backs on a group of people for which there is credible evidence suggesting they were involved in the murder of 160 people."

Agents who worked both the McVeigh bombing and the bank robbery spree — two of the FBI's highest priority cases of the 1990s — said they suspected a link between the two because of physical evidence as well as statements made by the robbers and a girlfriend.

The agents said they ruled out a connection when the bank robbers denied their involvement and provided an alibi showing they left Oklahoma three days before McVeigh's bomb detonated outside the Alfred P. Murrah federal building on April 19, 1995.

That alibi, however, was contradicted by information Langan offered prosecutors and by car sales records showing the bank robbers were still in the Oklahoma area after they claimed to have left, FBI documents show.

Defenbaugh said his investigators never were told about the license, the blasting caps or problems with the robbers' alibi, and he first learned of them from the AP this year.

He and other agents said there could be plausible explanations for each — blasting caps are plentiful and the bank robbers were experts in identification fraud — but those questions needed to be answered.

FBI officials couldn't explain why certain information from the robbery investigation wasn't shared with Defenbaugh's team, even though the two teams worked together closely.

McVeigh in 1994 stole from a quarry hundreds of construction blasting caps, some which he used to explode the Oklahoma City bomb. The FBI spent months unsuccessfully trying to locate many of the other stolen caps.

Agents collected witness testimony that McVeigh had placed some of the extra caps in two boxes wrapped in Christmas paper in the back of his car along with mercury switches and duffel bags.

One electric and five non-electric blasting caps were found in the Aryan Republican Army robbers' Ohio hideout in January 1996, along with mercury switches, a duffel bag and two items described as a "Christmas package," FBI records show. Rather than analyze the caps as evidence, the FBI allowed firefighters to destroy them at the scene.

The destruction "in itself was in total violation of the FBI's regulations and the rules of evidence," Defenbaugh said. "If there was Christmas wrapping paper, that should really have been a key to people. That should have keyed interest, and caused them to be compared by the laboratory to see if these were from McVeigh."

The FBI took photos of the caps and kept the driver's license but refused repeated requests from AP to release them.

Defenbaugh said he also was concerned his investigation was never told the bank robbers had an Arkansas drivers' license in the name of Robert Miller, the alias name used by Arkansas gun dealer Roger Moore.

The government contended at McVeigh's trial that Moore was robbed at his Hot Springs, Ark., home in November 1994, and the proceeds were used to fund the Oklahoma City bombing.

McVeigh was in Ohio the day Moore was robbed, staying in a hotel near a bank the robbers would hit just one month later.

FBI agents were so suspicious of a link they analyzed video footage of the robbery to see whether McVeigh participated, but the FBI lab reported the comparison of McVeigh's picture to the bank surveillance video was inconclusive. That video was destroyed in 1999 by the FBI despite rules to the contrary.

A few months after Moore's robbery, McVeigh and the gun dealer exchanged letters in which Moore went by the name Robert Miller, the same alias on the license bank robber Richard Guthrie possessed when he was arrested in 1996.

"If the license is the same as our Roger Moore, then I'm really concerned," Defenbaugh said.

Defenbaugh said he also was unaware that the government recovered a videotape from the robbers that included surveillance of several properties. Langan said he suspects the tape includes footage of Moore's home where the 1994 robbery occurred.

Adding to the intrigue, a death row inmate who has written a book about his experiences with McVeigh inside prison alleges the convicted Oklahoma City bomber told him the bank robbery gang assisted the bombing plot.

David Paul Hammer, a convicted murderer set to be executed in June, said he has no way of knowing whether McVeigh told him the truth but he kept notes from his conversations and believes prison officials surreptitiously recorded some conversations. His book, due out next month, details what McVeigh told him about the robbers.

"He (McVeigh) knew they were involved because he said he planned it with them," Hammer said. "He said they were part of what he called his security detail."

FBI agents acknowledged they investigated suspicions of a link between McVeigh and the bank robbers.

When bank robber Mark Thomas was indicted in January 1997 he told reporters that at least one gang member was involved in the Oklahoma bombing, according to a newspaper clip in FBI files. "Your young Mr. Wizard took out the Murrah building," Thomas was quoted as saying of one of his bank robbery colleagues.

Thomas' ex-girlfriend told FBI agents her boyfriend stated shortly before he traveled to a white supremacist compound at Elohim City, Okla., in spring 1995 that a federal building was about to be bombed.

"We are going to get them. We are going to hit one of their buildings during the middle of the day. It's going to be a federal building," Donna Marazoff quoted Thomas as saying during her FBI interview.

FBI agents also recovered a video tape from the bank robbers in which they vowed a war with the government and talked about a "courthouse massacre" while holding up a copy of an explosives manual.

Thomas could not be located for comment, but was quoted in FBI interview reports as saying "he could not recall ever saying anything to Donna Marazoff about blowing anything up or about taking part in any bombings."

The FBI agents said they dropped the inquiry after Thomas, Guthrie and other members of the ARA gang were captured in 1996 and 1997, denied their involvement in McVeigh's bombing and provided an alibi.

The alibi, according to FBI records, was that the bank robbers left Elohim City on April 16, 1995, and went to a house in Kansas to meet with Langan three days before the bombing. But the FBI's own records conflicted with that account.

Used car sales records gathered by the FBI showed the gang purchased a truck on April 17, 1995, on the Oklahoma-Arkansas border, then returned to Elohim City to sell an old vehicle.

Langan said he offered to tell prosecutors back in 1996 that the bank robbers' alibi was bogus. "They didn't return to the house until the morning of April 20," Langan claimed.

A January 1996 FBI teletype stated the FBI had received information from an informant that McVeigh had made repeated contacts with the Elohim City compound where the bank robbers frequently stayed.

The teletype said McVeigh called the compound April 5, 1995, on "a day that he was believed to have been attempting to recruit a second conspirator to assist in the OKBOMB attack." At the time, at least two banks robbers were present, FBI records show.

Defenbaugh said while the evidence was never introduced at McVeigh's trial, FBI agents did believe McVeigh was seeking to recruit additional help to facilitate his getaway. But he said the FBI failed to find any evidence McVeigh received help or made other contacts to Elohim City except for the one call.

The documents show FBI agents first suspected a possible link in summer 1995 when Guthrie left behind at the site of two bank robberies a newspaper article about the Oklahoma City bombing with McVeigh's picture circled.

Langan said the robbers became fearful Guthrie might recklessly implicate them in the Oklahoma City bombing, and in fall 1995 discussed killing Guthrie. Guthrie eventually committed suicide after his capture by authorities the following spring.