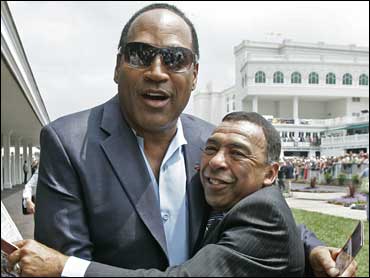 The owner of an upscale steakhouse in Louisville said he asked O.J. Simpson to leave his restaurant the night before the Kentucky Derby because he is sickened by the attention Simpson still attracts.

"I didn't want to serve him because of my convictions of what he's done to those families," Jeff Ruby said in a telephone interview Tuesday. "The way he continues to torture the lives of those families ... with his behavior, attitude and conduct."

Simpson, an NFL Hall of Famer and Heisman Trophy winner, was found innocent in 1995 of killing his ex-wife, Nicole Brown Simpson, and Ron Goldman but was found liable in a civil trial that followed.

Ruby has restaurants in Cincinnati, Louisville and Belterra, Ind. He said Simpson, who was in town for the Derby on Saturday, came in with a group of about 12 Friday night and was seated at a table in the back. A customer came up to Ruby and was "giddy" about seeing Simpson, Ruby said.

"I didn't want that experience in my restaurant," Ruby said, later adding that seeing Simpson get so much attention "makes me sick to my stomach."

He said he went to Simpson's table and said, "I'm not serving you." Ruby said when Simpson didn't respond, he repeated himself and left the room.

Ruby said Simpson soon came up to him and said he understood and would gather the rest of his party to leave.

Simpson's attorney, Yale Galanter, said the incident was about race, and he intended to pursue the matter and possibly go after the restaurant's liquor license.

"He screwed with the wrong guy, he really did," Galanter said by telephone Tuesday night.

Ruby said the incident had to do with Simpson's past.

"It was the first time since 1994 he has ever shown any class," Ruby said. "He showed it that night in the restaurant" by leaving quietly.

Ruby said after Simpson left, people in the restaurant started applauding him. He said he has received about 100 positive e-mails since the incident.

The walls of Ruby's restaurants are decorated with celebrity photos. A photo of Simpson and Ruby used to be on display, but Ruby said he took it down after the killings.