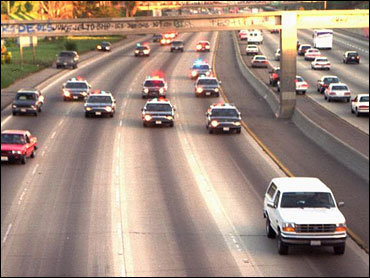 NEW YORK (CBS/AP) 16 years ago today, on June 17, 1994, former football star O.J. Simpson led police on a dramatic highway chase after he was charged with the double murder of his ex-wife, Nicole Brown Simpson and Ronald Goldman.

Upon learning that he would be arrested, Simpson fled, reneging on an agreement made by his attorney to surrender to authorities once an arrest warrant had been issued.

Simpson's white Ford Bronco was soon spotted on a highway traveling towards Los Angeles. California highway patrol cars took up pursuit but did not attempt to stop the Bronco, which was traveling at 35 miles per hour.

At the wheel was long-time Simpson friend and former teammate, Al Cowlings, who advised police via cell-phone that Simpson was holding a gun to his own head.

Millions of Americans watched the bizarre scene unfold live on television and crowds gathered along the highway to cheer him on.

The chase lasted 60 miles and ended an hour after the car pulled into Simpson's driveway.

Simpson was then taken into custody and formally charged. He pleaded guilty three days later.

In the criminal trial, Simpson was acquitted of murder. A civil jury later held him liable for the deaths and ordered him to pay $33.5 million to the Brown and Goldman families.

Simpson's lawyers were back in court early this month, set to ask a Nevada Supreme Court panel to overturn the imprisoned former football star's conviction in an armed Sept. 2007 hotel room heist.

According to The Associated Press, attorneys for Simpson and convicted co-defendant Clarence "C.J." Stewart argued Friday that neither man got a fair trial before they were convicted of robbing two sports memorabilia dealers of what Simpson claimed were his own belongings.

They say Simpson's acquittal in the 1994 slayings tainted the Las Vegas case.