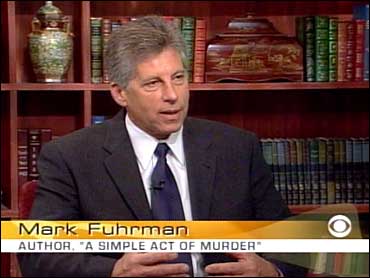 The official investigation into the assassination of President Kennedy found that Lee Harvey Oswald acted alone. But a recent poll shows nearly 80 percent of Americans doubt that conclusion of the Warren Commission.

Retired Los Angeles police detective Mark Fuhrman, who rose to fame during the O.J. Simpson case, says he's always been fascinated by the conspiracy theories surrounding the JFK assassination so, when the opportunity presented itself, he decided to conduct his own probe and put his findings in a book.

He concluded the "lone gunman theory" was accurate and the assassination was "A Simple Act Of Murder," the title of his new book.

On The Early Show Friday, Fuhrman to co-anchor Harry Smith that there have been about 450 other books about that fateful day in Dallas in November 1963, and "That's not counting magazine articles, documentaries, docudramas or anything else."

So why did he decide to go that route?

"No one with any investigative background, like a detective, has given this case a thorough examination," he told CBS News, "so I decided to conduct my own investigation, which I've detailed in this book."

Fuhrman told CBS News that he went where the evidence led him, which was that Oswald "acted alone. None of the conspiracy theories really pans out. You have to look at this case as a simple murder, where the victim just happened to be the president of the United States. Too much time has been spent on proving theories that just don't hold any water. This case is just not as complicated as many people think."
2
"Lee Harvey Oswald, it's clear that we can connect him up at every place in this crime," Fuhrman told Smith. "He has no accountability during the assassination. He is the trigger man. His fingerprints, the gun. It goes on and on and on.

"So it's not something that is impossible, improbable that he did it. In fact, it was quite easy.

"It would be nice if it was a nice, juicy conspiracy, and you could have all this trail of espionage, but you know, it really came down to this Walter Mitty guy that couldn't fit, he tried to insert himself.

"He almost created his own conspiracy, kind of shadow. Because he goes to all these places to try to become part of something, and everybody says, 'Get out.' They don't want any part of him."

In the book, Fuhrman examines ballistics and medical records, reviews crime scene photos and the famous Zapruder film, and takes into account the testimony of hundreds of witnesses.

The book has many photos, including autopsy photos, as well as diagrams, and drawings by Fuhrman himself.

"I'm kind of right in the middle. I'm kind of upsetting everybody right now."

Why include autopsy photos in the book?

"It's grisly, but it's necessary," Fuhrman says. "We live in a 'CSI' world now, where people want this information. And they want to have visuals along. I think that's one of the collapses of this investigation.

To read an excerpt of "A Simple Act of Murder," click here