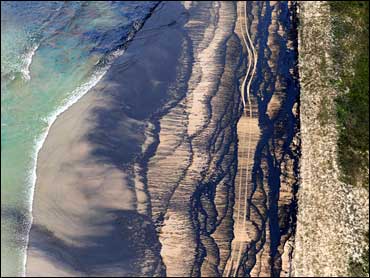 Authorities declared a disaster zone Friday along a stretch of some of Australia's most pristine and popular beaches after tons of fuel oil that leaked from a stricken cargo ship blackened the creamy white sand for miles.

The government of northeastern Queensland state denied it had acted too slowly to stop an environmental disaster, and threatened the shipping company with a multimillion-dollar compensation lawsuit.

National parks at Moreton and Bribie islands just north of the state capital of Brisbane were worst hit by oil spilled from the container ship Pacific Adventurer on Wednesday, and oil washed ashore in pockets along the popular Sunshine Coast.

The potential for long-term environmental damage was not clear. The affected area is far to the south of the Great Barrier Reef, which was not under threat.

Wildlife authorities said the only animal victims so far were a handful of birds that had been soaked in oil, but warned things could get worse as long as the slick remained.

Britain's Swire Shipping Ltd., the Hong Kong-registered ship's owner, said containers aboard the ship had slipped from the deck as it rocked in cyclone-stirred waters, ripping a hole in a fuel tank and spilling the equivalent of more than 11,000 gallons of heavy fuel oil into the sea. Later, the company said a diver's inspection of the hull had led it to conclude the amount of spilled oil was "significantly more" than that, but did not give a replacement figure.

The Australian Maritime Safety Authority said the ship, brought to port still leaking oil, would not be allowed to leave until officials were satisfied that the circumstances of the spill had been explained.

"We have detained the ship," authority chairman Graham Peachey told reporters. "It's not going anywhere until we release it." 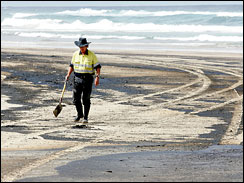 (AP Photo/Tertius Pickard)
(Left: A worker attempts to clear the oil spill on the beach on Moreton Island near Brisbane, Australia, March 13, 2009.)

"We will be pursuing these ship's owners for full compensation for the cost of this clean-up," Bligh said. Swire "should stand on notice that they will get a very large compensation claim from the Queensland government," she said.

"This could ... be the worst environmental disaster we have faced," she said.

Under Australian law, the ship's owners face fines of up to 2 million Australian dollars ($1.3 million) and could be liable for up to AU$250 million ($160 million) more in penalties for causing environmental damage.

Bligh declared some 37 miles of normally white-sand beaches a disaster zone, giving authorities the power to close off public access. Bulldozers and other heavy machinery began moving onto affected beaches to scrape up the blackened sand.

"If there is any grounds for prosecution of this ship and its owners, we will not hesitate to take that action," she said.

In a statement, Swire said it "regrets the extent of the environmental pollution caused by spills of heavy fuel oil from the ship and the company is offering assistance with the clean up."

The company and its insurers were in discussion with the government about cleanup costs, it said.

On Friday, tourists and locals gathered in pockets along the worst-hit beaches to survey the scene.

Surfers left their boards back at their hotels or home. One mother told her disappointed daughter that she would have to leave her plastic pail and shovel in the car because the beach was closed.

In the resort town of Coolum, about 60 miles north of Brisbane, tourists who usually snapped pictures of each other on a popular seaside boardwalk instead had their cameras trained on the ugly black surf.

About 30 miles south, government workers raked up oil-coated sand while wildlife officials tried to catch and clean birds soaked in the sticky substance.

"This is our beach. I've been coming here for years, and it's sad to see this happen here," said resident Vicki Ayliffe, as she picked up soft drink containers and milk cartons coated with oil.

The state Environment Protection Agency was concerned about the spill's impact on wildlife but said Friday only 13 oil-affected animals had been spotted. Spokesman Clive Cook said agency workers had caught and cleaned three of those - a pelican, a turtle and a wading bird.

"At the moment we're very lucky ... but obviously in these circumstances we're worried it might escalate," he said.

Pacific Adventurer was on its way from the port city of Newcastle to Indonesia when it struck the remnants of Cyclone Hamish off southeast Queensland. In rough seas, 31 containers that held 694 U.S. tons of ammonium nitrate fertilizer fell from the deck, rupturing a fuel tank. The containers have not been found.