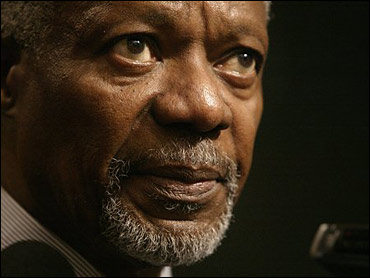 U.N. Secretary-General Kofi Annan is back in the spotlight over the scandal-tinged oil-for-food program after two e-mail memos dating from 1998 appeared suggesting he may have known about a multimillion-dollar U.N. contract awarded to the company that employed his son.

One of the e-mails describes an alleged encounter between Annan and officials from Cotecna Inspection S.A. in late 1998 during which the Swiss company's bid for the contract was raised.

The second, from the same Cotecna executive, expresses confidence that the company would get the bid because of "effective but quiet lobbying" in New York diplomatic circles.

The previously unknown e-mails will be a new distraction for the U.N. secretary-general, who had claimed he was exonerated by an interim report released in March by the Independent Inquiry Committee, chaired by former U.S. Federal Reserve Chairman Paul Volcker. Annan had hoped that the committee was finished investigating his personal involvement.

"The discovery of emails directly linking meetings of the Secretary General with the awarding of the contract to company which employed his son contradicts earlier statements and, if corroborated, directly links Kofi Annan to the corruption scandal," said CBS News Foreign Affairs Analyst Pamela Falk from the U.N.

If accurate, the new details would cast doubt on a major finding the U.N.-backed committee made in March — that there wasn't enough evidence to show that Annan knew about efforts by Cotecna, which employed his son Kojo, to win the Iraq oil-for-food contract. The Associated Press obtained the e-mails Tuesday.

Through his spokesman, Annan said he didn't remember the late 1998 meeting. He repeatedly has insisted that he didn't know Cotecna was pursuing a contract with the oil-for-food program.

The $64 billion oil-for-food program was aimed at helping ordinary Iraqis suffering under U.N. sanctions imposed after Saddam Hussein's 1990 invasion of Kuwait, but it has become the target of several corruption investigations since the Iraqi leader was ousted.

A key issue has been whether Annan was guilty of a conflict of interest because the United Nations awarded the $10 million-a-year contract to Cotecna while Kojo Annan was a consultant for the company.

In the interim report in March, Volcker's committee accused Cotecna and Kojo Annan of trying to conceal their relationship after the firm won the contract. It said Kofi Annan didn't properly investigate possible conflicts of interest but cleared him of trying to influence the contract or violating U.N. rules.

"The investigation of these emails by the Volcker Commission, which had found no link between the Secretary General and the scandal raises questions about the independence of the U.N.-appointed commission," said Falk, "it has the ring of the fox guarding the chicken coop to investigators on Capitol Hill."

In a statement, the committee said it was "urgently reviewing" the two e-mails, which it received from Cotecna on Monday night.

"Does this raise a question? Sure," said Reid Morden, executive director of the probe.

Morden said investigators had planned to interview Annan soon as part of its investigation into management of oil-for-food. "This certainly adds another topic," he said of the Cotecna e-mails.

In a statement released earlier Tuesday, Cotecna again denied wrongdoing in getting the contract to certify deals for supplies Iraq imported under oil-for-food.

"Cotecna, the Swiss company involved in the investigation and the source of the new emails, appears to be now cooperating with Congressional committees investigating the scandal, but their disclaimers -- that there was no undue influence in the awarding of the contracts -- does not square with the contents of the emails themselves," said Falk. "The information provided by Cotecna certainly appears to be the tip of an iceberg."

The first Dec. 4, 1998, e-mail from Michael Wilson, then a vice president of Cotecna and a friend of both Kofi and Kojo Annan's, mentions brief discussions with the secretary-general "and his entourage" at a summit in Paris in 1998.

He wrote that Cotecna's bid was discussed and Cotecna was told it "could count on their support."

Wilson's memo also refers to a "KA" who made courtesy calls to various African leaders at the Paris summit. That could be Kojo Annan, then a Cotecna consultant.

Eckhard said it would be reasonable to assume that Kofi and Kojo Annan would have met in Paris if Kojo Annan was there, though he knew of no record of it.

The contents of that e-mail were first reported by The New York Times.

The second e-mail from Wilson, sent minutes after the first, discussed a meeting that took place three days earlier with U.N. procurement officials to talk about the contract bid.

Under a section labeled "conclusion," it said: "With the active backing of the Swiss mission in New York and effective but quiet lobbying within the diplomatic circles in New York, we can expect a positive outcome to our efforts."

Most telling about that e-mail, however, was a brief mention in which Wilson said Annan's approval of the bid was required. U.N. rules in fact did not require Annan to approve those decisions, something officials here have repeatedly stressed.

In that light, Wilson's belief that Annan's approval was necessary sheds light on his thinking at the time toward the secretary-general. Wilson could not be reached for comment Tuesday.