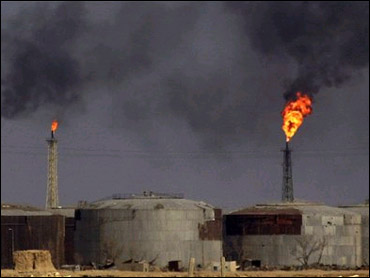 Crude oil prices rocketed higher again Thursday, approaching a new milestone of $48 a barrel despite reassuring comments from Iraq that it would resume full oil exports from its southern terminals.

The spike raised fears that the psychologically important $50 mark could be breached.

Light, sweet crude for September delivery stood at $47.81 in after-hours trading on the New York Mercantile Exchange, up 54 cents from Wednesday's record high closing of $47.27.

Adjusted for inflation oil still costs about $9 less per barrel than it did leading up to the first Gulf War. On London's International Petroleum Exchange, Brent crude futures for October delivery rose 52 cents to $43.55.

Thursday, Iraqi oil minister Thamer al-Ghadhban said the country was prepared soon to resume pumping its capacity of 1.7 million barrels per day from its current levels of around 1 million per day.

Forces loyal to radical cleric Muqtada al-Sadr had earlier threatened to blow up crucial oil pipelines, prompting a temporary stop to the flow of crude.

"We will resume full south oil exports shortly," Ghadhban said at a news conference in Baghdad.

Traders were also watching for developments in Iraq and possible disruptions there despite a freshly brokered peace deal between the al-Sadr and the Iraqi interim government.

But analysts said such reassurances would do nothing to stop the spike.

"At the heart of why we are higher is that demand does usually grow at a steady basis from now until January and there is no great cushion of available supply," said Peter Beutel, president of Cameron Hanover Inc., a New Canaan, Conn.-based energy consulting group. Beutel said the market is also being pulled higher by its own momentum — "the $50 level is acting like a magnet."

"On the demand side of the equation, China seems to be going strong. Despite efforts to cool down the economy, it hasn't made a significant change in the demand for oil production," he said, adding that it was the same in the U.S. where the economy was still "robust and stable."

The price of crude is more than 50 percent higher than a year ago and has spiked by almost 30 percent in the past six weeks.

The rally was kick-started by an Energy Department report that showed widely expected declines in U.S. inventories of oil and gasoline which showed commercial crude supplies were down by 1.3 million barrels to 293 million barrels.

Analysts and traders also remained concerned over developments and a possible cut in supply from Russia and Venezuela, both major crude exporters.

Russian oil giant Yukos continues to teeter on the brink of bankruptcy as the government tries to collect $3.4 billion in back taxes — a move that threatens to cut off Yukos' daily crude supply of 1.7 million barrels.

In Venezuela, the world's fifth-largest exporter, opposition leaders refused to participate in an audit of last Sunday's referendum to oust President Hugo Chavez — which officials say he won convincingly.

As prices spike, analysts continue to be wary of Organization of Petroleum Exporting Countries claims it could raise its production capacity immediately to meet demand and cool prices.

"It's a Catch-22. There isn't much more capacity and even if OPEC increases it, it won't cause any significant dent because there is still instability around," said Shum.

"Then what happens? There is even less spare capacity and it will make the situation worse psychologically."