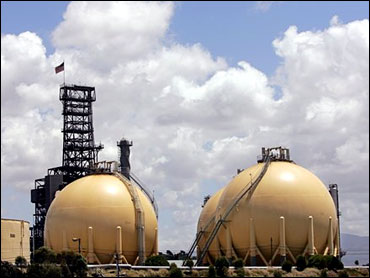 Crude oil futures hit a record high Monday, reaching $59.18 a barrel in Asian trading on concerns that demand will outpace refineries' ability to produce diesel and gasoline in the second half of the year.

Nymex crude for the July contract reached the mark mid-morning in Singapore, a rise of 71 cents from Friday's close, the second straight day oil has set intra-day records. After reaching the high, it fell back slightly to $58.94 a barrel.

While Nymex oil futures are more than 50 percent higher than a year ago, they are still well below the inflation-adjusted high above $90 a barrel set in 1980.

"Bulls believe the only thing that can cool the market is an erosion in demand, but so far there are no signs of this," said Energyintel analyst Matt Piotrowski. "They also focus on OPEC's recent meeting as reinforcing the belief that the organization cannot cool prices."

The Organization of Petroleum Exporting Countries failed to soothe the market last week when it agreed to raise its daily output quota to 28 million barrels a day because its members had already been unofficially exceeding that level.

Including Iraq, which is not bound by the 11-member cartel's quota system, OPEC is pumping close to 30 million barrels a day, or about 35 percent of global demand.

"We saw last week's expectation being built that U.S. refineries would struggle to meet the demand of the driving season. This is likely to provide support for the coming week," said ANZ Bank energy analyst Daniel Hynes from Melbourne, Australia.

Analysts are also concerned that aging U.S. refineries will be unable to cope when demand peaks later in the year for winter production of heating oil, diesel and jet fuel.

Hynes also said crude's rise was partly a reaction to the kidnapping of two German and four Nigerian Shell subcontractors who had been seized by gunmen on Wednesday. They were released Saturday.

The militants, a group called the Iduwuni National Union for Peace and Development, demanded Shell pay local communities $20 million as compensation for pollution and environmental degradation due to oil activities.

"The high crude prices are certainly a reaction to the unrest in Nigeria, and the effects of Western counties removing embassy staff there," said Hynes. "Supply is so tight now that any possibility of supply being halted or constrained has driven up prices over the last couple of days."

Nigeria exports some 2.5 million barrels of oil daily, making it the world's seventh-leading exporter and the fifth-biggest source of U.S. oil imports.