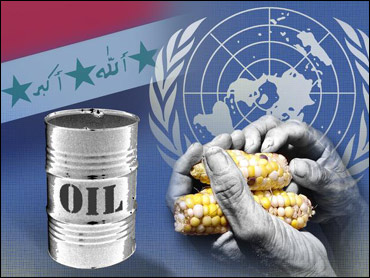 A scathing report on corruption in the U.N. oil-for-food program for Saddam Hussein's Iraq drew widespread denials, terse dismissals and protestations of innocence Friday, but also pledges to investigate from some of the 2,200 companies cited and countries with citizens named.

Russian officials angrily alleged that documents accusing companies and officials in that country were fake, and the head of the nation's electricity monopoly called for the report's writers to be punished. But in a rare partial admission, Sweden's Volvo AB acknowledged making payments through an agent to Iraqi authorities but said it did not consider that bribery.

The U.N. report issued Thursday rattled reputations around the world with charges of kickbacks in lucrative contracts in the 1996-2003 program, under which Iraq was allowed to sell oil provided the proceeds went to buying humanitarian goods to help offset U.N. sanctions.

Saddam, who could choose the buyers of Iraqi oil and the sellers of humanitarian goods, corrupted the program by awarding contracts to – and getting kickbacks from – favored buyers, according to the report by the Independent Inquiry Committee led by former U.S. Federal Reserve chairman Paul Volcker.

Countries like Russia that opposed sanctions got preferential treatment from Saddam's regime, the report said. Among those implicated was former Kremlin chief of staff Alexander Voloshin, now board chairman of the state electricity grid UES. Russian Foreign Minister Sergey Lavrov, in remarks reported by domestic news agencies, claimed some of the documents cited by the commission used forged signatures. And UES chief executive Anatoly Chubais said the commission knew Voloshin's signature was faked on oil contracts, adding: "I hope that those responsible for the mistake will be punished."

Volcker's team was extremely cautious on the claim against Voloshin. It noted that Iraqi Oil Ministry records reported about 4.3 million barrels were allocated in his name through a Russian company called Impexoil.

Yet it also acknowledged Russian claims that his signature was forged and said samples of his signatures were "not substantially similar" to the signature that appeared on a letter purportedly written by him. It said it could not find evidence linking Voloshin with Impexoil.

In Sweden, Volvo AB, whose Brussels-based construction division was among the companies named in the report, acknowledged the company made payments through an agent to Iraqi authorities.

"We did business with an authority in Iraq. The same authority tells our agent that you have to pay a fee to do any business at all," chief executive Leif Johansson was quoted as telling the Swedish news agency TT.

"When authorities said that, we drew the conclusion that this was the way to do business in Iraq," he said. "No one linked that to bribes."

Volvo AB no longer owns the carmaker Volvo, which was sold in1999 to the Ford Motor Co.

Switzerland said it has launched a criminal investigation focusing on four people connected to the oil-for-food program. Swiss authorities already have fined a Geneva-based oil-trading company $40,000 for paying kickbacks under the program, but have not identified the company.

France will study the report and "wants full light to be shed on the embezzlement that took place in the framework of the oil-for-food program," Foreign Ministry spokesman Jean-Baptiste Mattei said. French judges are investigating 10 French officials and business leaders on suspicion they received oil allocations as kickbacks.

Among them is former U.N. ambassador Jean-Bernard Merimee, who held the post from 1991-95, and according to the report received more than $165,000 in commissions from oil allocations awarded to him by the Iraqi regime.

The report also said former French Interior Minister Charles Pasqua, now a senator, was awarded 11 million barrels of oil, an allegation he denied Friday in an interview with The Associated Press.

"I never received anything," Pasqua said, adding that he believed somebody used his name without his knowledge. "It is obvious to me that the Americans want to implicate France."

In Australia, Prime Minister John Howard said he doubted the Australian Wheat Board, which was the single largest supplier of humanitarian goods under the program, would have knowingly made improper payments. The report said the board, which sold $2.3 billion of wheat to Iraq, made "side payments" for transportation of the grain to a Jordanian company that was owned in part by Saddam's government.

Andrew Lindberg, managing director of the wheat board's successor AWB, said "we didn't know that the money, that we believed we were paying for transport, was being diverted to the regime."

In India, External Affairs Minister K. Natwar Singh denied he was a beneficiary of the U.N. oil-for-food program for Saddam Hussein's Iraq, saying allegations of his involvement were "baseless and untrue."

The ruling Congress Party also separately denied that it was in "any way involved in the oil-for-food' program, and said it had been "unfairly and incorrectly" named in the U.N's report.

Texas oilman Oscar S. Wyatt Jr., the former chairman of Coastal Corp. who was described in the report as a favorite customer of Iraq, pleaded not guilty Thursday in New York to charges that he conspired to pay several million dollars in illegal kickbacks to Saddam's regime to win oil-for-food contracts. Volcker said Wyatt, 81, was the lone exception to an Iraqi ban on selling oil to American companies.

The report also implicated Lukoil Asia Pacific, a company the report called a subsidiary of Russia's No. 1 producer, Lukoil.

Lukoil's spokesman, Dmitry Dolgov, said he had never heard of the company, adding that investigators had worked with Iraqi documents, which could have been forged.

"This creates the impression that this report is aimed at distracting attention from the oversights of U.N. officials and laying the blame with certain companies," Dolgov said.
By Jim Heintz