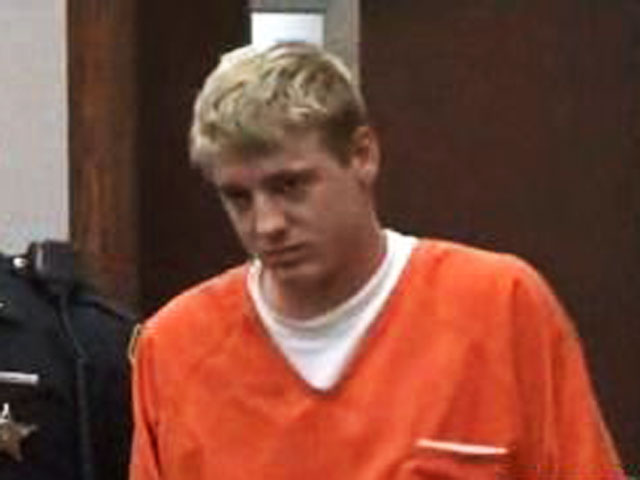 COLUMBUS, Ohio (CBS/WTOL/AP) On Halloween, a 16-year-old boy returned to his family's home in Martin, Ohio and believed he had stumbled into a prank when he found the bodies of his brother, mother and stepfather.

Devon Griffin discovered the bodies of his slain family members, Derek Griffin, 23, Susan Liske, and her husband William Liske, when he returned home after attending church.

The teenager told authorities it looked like a joke from a Halloween party, Ottawa County Sheriff Bob Bratton said.

He soon realized it wasn't, and ran outside and called an aunt, who called 911.

William Liske's 24-year-old son, also named William Liske, was arrested Sunday near the family's cabin 170 miles from Martin. Liske reportedly has a history of mental illness and could suffer from schizophrenia.

"They've had a lot of trouble with him with the law. And he's threatened Suzie before, but there's been all kinds of trouble," Griffin's aunt Lori Morse told CBS affiliate WTOL.

The Blade newspaper in Toledo reported that in 2004, the younger Liske was charged with assault and robbery and accused of hitting his stepmother with a coffee cup and taking her car keys. A plea of not guilty by reason of insanity was filed for him. The state later dropped the charges.

The suspect is currently being held on $1 million bond; so far Liske has only been charged with his father's murder.

Ottawa County Prosecutor Mark Mulligan believes the killings were premeditated and could be upped to three counts of aggravated murder.

He also added that a potential witness spotted some aspects of the crime, but did not witness the actual killings, says WTOL.

The Liskes and Derek Griffin suffered severe trauma to the head, but it was not immediately clear whether a gunshot or a blunt object killed them, Ottawa County Sheriff Bob Bratton said.

William Liske Jr. is scheduled to appear in court again on Nov. 10.