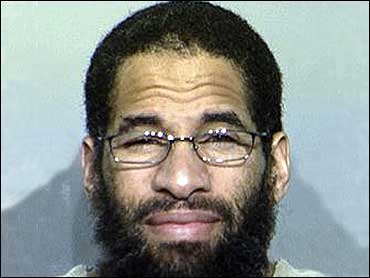 Nearly six years after the government made a startling announcement about alleged US-based terrorists, a federal judge sentenced the third of a trio of men charged with terrorism-related crimes to 20 years in prison.

American-born Christopher Paul, 44, was accused of joining al Qaeda in the early 1990s and helping teach fellow Muslim extremists how to bomb U.S. and European targets.

The Justice Department accused Paul and two other men of discussing terrorist attacks during an August 2002 meeting at a coffee shop in suburban Columbus, Ohio.

The government won't say whether the case is closed.

When Paul pleaded guilty last summer, Fred Alverson, a U.S. Attorney's Office spokesman, said the investigation was continuing. The government has not identified other individuals connected with the trio and no other charges are pending.

Paul grew up in the Columbus suburb of Worthington. He was one of a handful of blacks at his high school, where he competed in gymnastics and was known as a friendly, cooperative and polite student who was never in trouble.

He spent a year at Ohio State as an engineering major, then embarked on a sinister career, according to the government.

An FBI statement read at Paul's plea hearing said Paul, an Islamic convert, joined al Qaeda after traveling to Afghanistan in the early 1990s and became committed to furthering the objectives of that group and other radical Islamic fundamentalists.

As part of his association with al Qaeda, he fought with holy warriors in Afghanistan at a time when the mujahadeen were battling Afghanistan's post-Soviet Marxist government, the statement said.

The FBI said Paul also tried to recruit other individuals in Columbus to join a holy warrior group and trained members of an alleged terrorist cell in Germany knowing the group was plotting to bomb American tourists and overseas U.S. facilities such as embassies.

The government didn't say if any attacks were carried out.