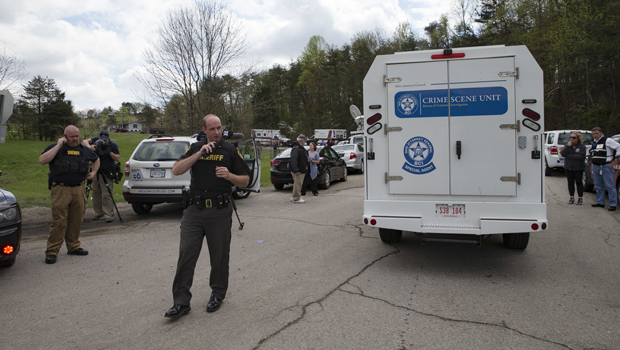 PIKETON, Ohio -- Authorities urged residents to be cautious in this part of rural southern Ohio as the search continued Saturday for whoever fatally shot eight members of a family at four different properties.

Investigators interviewed more than 30 people hoping to find leads in the deaths of the seven adults and 16-year-old boy whose bodies were found in homes southwest of Piketon on Friday.

CBS Columbus affiliate WBNS-TV obtained cell phone video showing a man being taken into police custody at gunpoint Friday. The man was not arrested and isn't being called a person of interest in the case, CBS News correspondent David Begnaud reports.

All victims were shot in the head, authorities said, and it appeared some were killed as they slept, including a mother in bed with her 4-day-old baby nearby. The infant and two other small children were not hurt.

Authorities didn't release the victims' names but said they're members of the Rhoden family. Investigators said none of the deaths appeared self-inflicted, so they believe at least one assailant is at large.

"We do not know whether we're talking about one individual or two or three or more," Attorney General Mike DeWine said.

Law enforcement officials say whoever is responsible for the killings should be considered armed and dangerous.

"This really is a question of public safety, and particularly for any of the Rhoden family," DeWine said.

Reader said Friday night that authorities had met with more than 100 relatives and friends of the Rhoden family at a church.

DeWine dismissed a report that the people authorities questioned included a person of interest.

The Pike County Sheriff's Office and the Ohio Bureau of Criminal Investigation are investigating the slayings. Pike County asked for the bureau's help Friday morning.

The first three homes where bodies were found are within a couple miles on a sparsely populated stretch of road, while the eighth body, that of a man, was found in a house farther away.

Authorities didn't release any information on what kind or how many weapons might have been used or whether anything was missing from the homes.

Goldie Hilderbran said she lives about a mile from where she has been told a shooting took place - news she received from a mail carrier who told her deputies had an area blocked off.

"She just told me she knew something really bad has happened," Hilderbran said.

Gov. John Kasich, campaigning in Connecticut for his Republican presidential bid, said his office was monitoring the situation in Pike County and the search for the killer or killers.

"But we'll find them, we'll catch them and they'll be brought to justice," he said.

The FBI in Cincinnati also said it was closely monitoring the situation and has offered assistance if needed.

Economically distressed Pike County, about 80 miles east of Cincinnati on the western edge of Appalachia, has about 28,000 people, more than a quarter of whom live in poverty. The area is home to a shuttered Cold War-era uranium plant that's still being cleaned up.