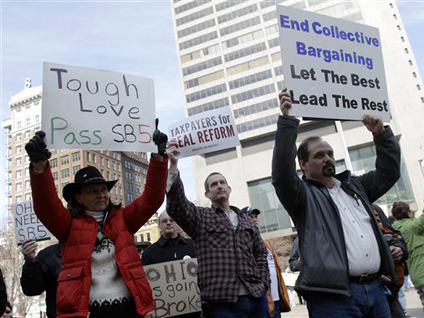 COLUMBUS, Ohio - The bargaining rights of public workers in Ohio would be dramatically reduced and strikes would be banned under a bill narrowly passed by the state Senate on Wednesday.

The Republican-backed measure that would restrict the collective bargaining rights of roughly 350,000 teachers, firefighters, police officers and other public employees squeaked through the state Senate on a 17-16 vote. Six Republicans sided with Democrats against the measure.

Firefighters and teachers shouted "Shame!" in the chamber as the legislation was approved and moved on to the Republican-controlled House, where it is likely to receive strong support.

The bill is similar to the Republican-supported collective bargaining bill in the Wisconsin legislature that has sparked national debate in its weakening of public employees' ability to negotiate contracts — although there are differences between the two. Wisconsin's bill exempts police and firefighters from the collective bargaining restrictions, while Ohio's does not. And the bill there in Wisconsin would affect 175,000 unionized public workers.

The Ohio bill would ban strikes by public workers and establish penalties for those who do participate in walkouts. Unionized workers could negotiate wages, hours and certain work conditions but not health care, sick time or pension benefits. The measure would do away with automatic pay raises and base future wage increases on merit.

The legislation would also set up a new process to settle worker disputes, giving elected officials the final say in contract disagreements. Binding arbitration, which police officers and firefighters use to resolve contract disputes as an alternative to strikes, would be eliminated.

Ohio Gov. John Kasich, a Republican like his counterpart, Scott Walker, in Wisconsin, praised the development.

Both have pushed anti-collective bargaining bills as part of budget-balancing measures, in the process reinvigorating unions that have turned out tens of thousands of supporters to fight the bills.

Republican Sen. Tim Grendell spoke out against the Ohio bill, saying the process would turn workers into beggars before city councils and other officials who oversee them.

The bill's sponsor, Republican Sen. Shannon Jones, said the bill, which would change a 27-year-old Ohio law, is long overdue and would help state and local governments control costs.

Jones said the bill is not an attack on the middle class, prompting snickering and coughs from members of the public in the crowded chamber. Democratic lawmakers pointed out teachers, pipefitters and public safety workers from their districts at the start of the hearing.

Standing in the Statehouse Rotunda after the vote, Columbus firefighter Terry Marsh said he understood Legislature's need to look for ways to save on costs and examine collective bargaining.

"But to ram something through within a few weeks is irresponsible, and to blame the budget woes of the state on the workers is a downright travesty," he said.

The latest New York Times-CBS poll found Americans oppose efforts to weaken the collective bargaining rights of public employee unions by a margin of almost two to one — 60 percent to 33 percent. The nationwide telephone poll of 984 adults had a margin of error of plus or minus three percentage points.