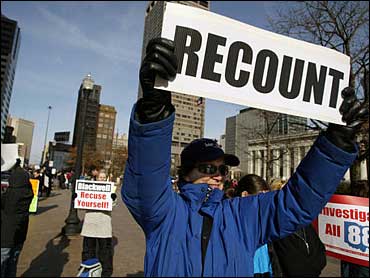 As it has done for 200 years, Ohio's delegation to the Electoral College is to meet Monday to cast ballots for president and vice president — but this time, there are demands that the electors wait until after a recount.

The Electoral College's vote in the Ohio Senate chamber is expected to be accompanied by demonstrations outside the Capitol sponsored by groups who don't accept that President Bush won the key swing state by 119,000 votes, guaranteeing his victory over Democrat John Kerry.

A demonstration was held Sunday as about 100 people gathered outside the Ohio Statehouse to protest the delegation's vote.

Led by a coalition representing the Green and Libertarian parties, the dissidents are paying for recounts in each of Ohio's 88 counties that will begin this week. The recount is not expected to be complete until next week.

"John Kerry conceded so early in the process that it's maddening," said Kat L'Estrange of We Do Not Concede, an activist group born after the election that believes Kerry was the real winner in Ohio and nationally.

L'Estrange, Susan Truitt of the Columbus-based Citizens Alliance for Secure Elections, and others demanded that the electoral vote be put off until the recount is completed.

"In Ohio, there has not been a final determination. Therefore, any meeting of the Electoral College in Ohio prior to a full recount would in fact be an illegitimate gathering," said John Bonifaz of the National Voting Rights Institute.

The dissidents claim there were disparities in vote totals for Democrats, too few voting machines in Democratic-leaning precincts, organized campaigns directing voters to the wrong polling place and confusion over the counting of provisional ballots by voters whose names did not appear in the books at polling places.

The Kerry campaign does not dispute that Bush won the election, but supports the Ohio recount. Kerry issued a statement Wednesday saying reported voting problems should be investigated to ensure there are no doubts in future elections.

Monday's Electoral College vote will follow the same script it has since 1804, when Ohio picked Thomas Jefferson, a Democratic Republican, over Federalist Charles C. Pinckney.

The electors will gather in the Senate chamber and cast votes for president, then vice president, on separate paper ballots. The ballots are counted by representatives of Secretary of State Kenneth Blackwell's office and then handed to Blackwell, who is the presiding officer of the electoral vote.

Blackwell then signs a "transmittal" of the vote total and sends it to the president of the U.S. Senate, who will announce the national total on Jan. 6.

Ohio's electors are a mix of Republican officials and others who are being rewarded for service to the party.

Karyle Mumper, chairwoman of the Marion County Republican Party, will be an elector for the first time. She, too, feels honored but believes the demonstrations outside will be a distraction.

"It's a shame they do not believe in the honesty and the professional people working the polls," said Mumper. "I just think they are sore losers and money and time (for the recount) could be spent on other things."