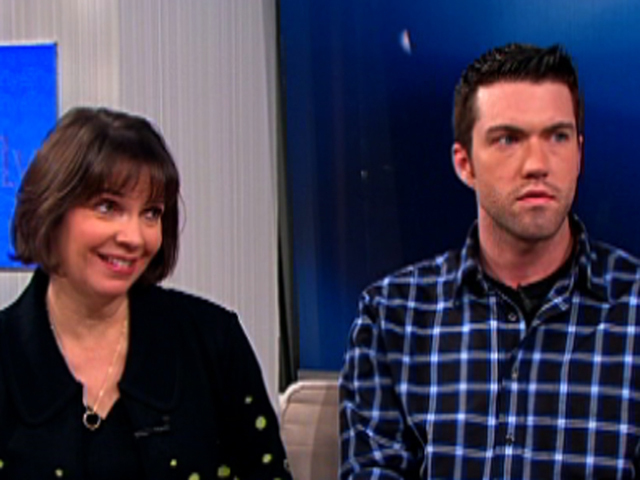 Over Labor Day weekend in 2006, 48-year-old Kathy Wangler died mysteriously in her home in Lima, Ohio, from carbon monoxide poisoning. Her husband, Dr. Mark Wangler, a top anesthesiologist, said it was an accident caused by a faulty water heater.

The story was featured this past Friday night on "48 Hours Mystery."

The 911 call made by Mark Wangler was played on the broadcast. In the call, the operator asks, "What is your emergency?"

Wangler replies, "My carbon monoxide detector's going off and my wife's having a seizure."

The operator asked, "Is she still conscious, is she still breathing?"

Wangler told Van Sant, "We had the carbon monoxide alarm down in the basement."

But police were skeptical from the start.

Dr. Wangler moved on with his life and got remarried to an old friend, Esther.

After three years of investigating, police arrested Wangler, believing he pumped automotive exhaust from an engine in the garage to the bedroom where Kathy Wangler slept.

Breitigan said, "They examined and tested the water heater, the furnace They could not find anything malfunctioning."

Van Sant asked Wangler directly during the "48 Hours Mystery" interview, "Did you murder your wife, Kathy?"

Wangler said, "Absolutely not. No."

Esther is adamant he is innocent.

This past March, Mark Wangler was convicted of murder and sentenced to 25 years to life in prison.

Wragge said, "I know, watching that piece, you're shaking your head a lot, kind of in disbelief. If a jury was able to find you guilty as quickly as they did, how come you seem to think he's so innocent?"

Esther Wangler said many things did not come out during the trial.

"If the prosecution was really interested in the truth, they would have tested the samples of Kathy's lung tissue. First of all, they withheld the fact that they had these samples from the defense, even though they're required by law to disclose any exculpatory evidence to us. Secondly, they say they never tested the lung tissue samples, but if their theory is Kathy was breathing in particles of engine exhaust - unspecified engine exhaust - at the time of her death, surely that would tell the story, wouldn't it?"

Why didn't they see any of this? Why weren't those suspicions raised?

Esther Wangler said, "I really don't think the jury understood the instructions fully about 'beyond a reasonable doubt.' There's a great deal of theatrics, a great deal of bias in the investigation that continued into the courtroom."

Aaron Wangler, Kathy Wangler's son, said he's still in disbelief that things have unfolded as they have.

"I don't feel like, Esther said, people really understood the science behind it. With our test witnesses and everything, I just feel like the jury didn't even comprehend what they were saying and even get the logic behind it," he said. "And it's just hard to still face the facts of what's happening with our lives."

When Wragge raised the issue of Mark Wangler's anesthesiologist background in this case, Esther Wangler protested, saying, "No, no. When have you had surgery and have carbon monoxide mentioned as an anesthetic? That's absurd. It's an absurd premise."

"But it seems to be a premise that the jury bought into," Wragge said.

Esther Wangler responded, "Yeah, the jury was part of the local community, which was saturated with -- saturated with bias, hearsay and half-truths in the local media. Yet our change of venue motion was denied by the judge. So, they were exposed to all kinds of information ahead of time. And people have to believe that anesthesiologists gas people which isn't what they do now. They typically use IVs and inject drugs that way."

The Wanglers, Esther Wangler said,are having problems with the appeals process.

"In order to file the appeal, we must have the official transcript," she said. "The person who is typing that official transcript is the wife of the lead detective. It's a clear conflict of interest, but it's something the court refuses to address. She says it will take her at least six months to type this transcript. In neighboring counties in Ohio, it's required to be done within two weeks."

Aaron Wangler said he has spoken with this father since the trial and they email each other every week.

"He's keeping optimistic, positive. Praying a lot," Aaron Wangler said. "You know, (he's) just hoping that this whole process starts taking place and that we can get justice, which was not served."

"But you both sit here and you vehemently, I guess, support the fact that, that an innocent man is in jail right now?" Wragge asked.