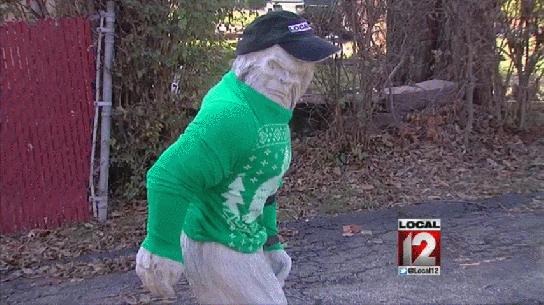 DELHI TOWNSHIP, Ohio -- A southwest Ohio family is searching for Sasquatch no longer.

The Spence family in Delhi Township, near Cincinnati, says their 400-pound concrete statue of the mythical beast, which was reported stolen Saturday, has been found.

Sixty-one-year-old Ralph Spence says his two sons bought the statue for him several years ago. They affectionately call it "Squashy."

Though it started out as a practical joke, the statue sort of became part of the family. They even dress it up for holidays.

Spence says he received a call from a friend Tuesday who saw the statue in a nearby open field. A note found with the statue poked fun at its weight, and was signed by "the body building bandits."

Spence says Squashy, the statue, is "a legend around here in the neighborhood."

As for the real Sasquatch... keep looking.