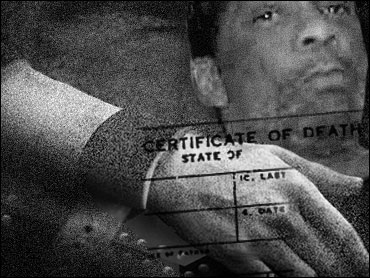 Problems finding a suitable vein to deliver an injection during a man's execution caused an unprecedented delay and seemed likely to feed a national debate over a method of capital punishment some consider cruel and unusual.

Joseph Lewis Clark, 57, died at 11:26 a.m. Tuesday at the Southern Ohio Correctional Facility, nearly 90 minutes after the execution was to begin.

Even the condemned man complained about the delay.

The curtain behind a glass panel separating him from the area where witnesses watched the execution was pulled shut. Clark, sentenced to die for killing gas station attendant David Manning during a spree of robberies in 1984, could be heard moaning and groaning from behind the curtain.

When the curtain reopened at 11:17 a.m., about 40 minutes later, Clark had a shunt in his left arm and his eyes were closed as the execution continued. He raised his head from the gurney several times and breathed deeply before becoming still.

Many death row inmates have claimed their executions could be painful, either because of the drug combination or because the procedure would not be handled by specially trained medical personnel.

"When you see situations like this, it gives rise to a cruel and unusual punishment claim," says CBSNews.com Legal Analyst Andrew Cohen. "A lawyer can stand up and say, 'Listen, even a condemned person, even someone who has been given society's worst punishment, shouldn't be put through this at the end.'"

On Friday, a federal judge in Columbus, Ohio, indefinitely postponed the execution of Jeffrey Hill, who is part of a death row lawsuit that claims Ohio's method of execution is cruel and unusual.

And the U.S. Supreme Court last week examined a Florida case that asks whether inmates can file last-minute civil rights challenges claiming lethal injection is cruel and unusual punishment. A ruling is expected before July.

The execution team Tuesday worked for about 25 minutes to find a vein in Clark's right arm before continuing with just the shunt in his left arm. At one point, a team member rolled up the leg of Clark's blue pants, looking for a vein in his right leg.

Prison procedures call for inserting two shunts, usually one in each arm, with one serving as a backup, prisons spokeswoman Andrea Dean said.

"This has never happened," Dean said of the delay, the longest since the state resumed executions in 1999.

Lethal injections are used by the federal government and 37 of the 38 U.S. states that have the death penalty. Nebraska still uses the electric chair. Anti-death penalty groups say that legal battles over the injection procedure are ongoing in at least 14 states.

A North Carolina inmate was executed last month only after the state changed its procedures to satisfy a federal judge. The state agreed to bring in a brain wave monitor to measure Willie Brown's level of consciousness and have medical personnel ready if needed.

In California, executions are on hold while a federal judge considers the constitutionality of that state's protocol. A hearing is scheduled in September.

"It is not a procedure that can be used without medical expertise and it underscores the dilemma that it created," Dr. Linda Emanuel, a physician and neurophysiologist at Northwestern University, told CBS News. "Physicians don't kill their patients. It's not part of what physicians are supposed to be doing."

Prisons director Terry Collins said Clark's history of drug use could have been factor in the difficulty finding a vein. He said the department would review the execution.

Clark, sentenced to die in November 1984, had been facing execution longer than all but 11 of the 193 men on Ohio's death row.

Manning's widow, Mary Ellen Manning Gordon, witnessed the execution along with Manning's two brothers. "I had no problems waiting," she said when asked about the delay.

In a statement after the execution, Gordon urged legislators to pass harsher laws to punish repeat offenders.

"When it takes 22 years to impose a sentence on a man who readily admitted murdering two vital young men, I have to believe our system is failing us," she said.

Clark shot and killed convenience store clerk Donald Harris the day before killing Manning, who was working the night shift at a Toledo, Ohio, gas station. Clark was arrested three days later after he shot and wounded a man withdrawing money from an automated teller machine.

In his final statement, Clark again expressed his regrets to the families of Manning and Harris.

"I would like to apologize to them for taking away someone that they loved, he said. "Twenty-two years ago I said I was sorry and today I'm still sorry."