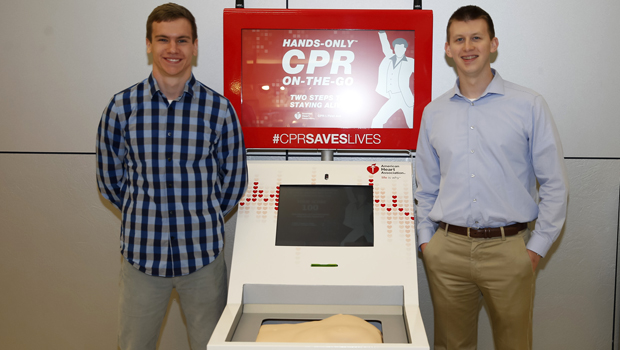 Matt Lickenbrock and Sean Ferguson are the poster boys for the rollout of CPR-training kiosks at airports, and for good reason.

Lickenbrock taught himself the lifesaving skill at one of the kiosks, then used it just two days later to revive Ferguson, who had been hit by lightning.

"I can't thank Matt enough," said Ferguson, who survived the lightning strike despite major burns. "I mean, what 21-year-old goes to a CPR kiosk? Why didn't he go to the bar? Why didn't he play on his phone?"

The pair, both students at Ohio's University of Dayton, helped unveil a kiosk last week at the Indianapolis airport; travelers will also see them at Chicago O'Hare, Las Vegas, Atlanta and Baltimore-Washington.

More than 20 percent of heart attacks occur in public places, and experts say the chances of survival are much higher if a bystander administers CPR before medics arrive.

The CPR kiosk rollout follows a successful test at the Dallas-Fort Worth airport, where a machine has trained more than 25,000 people since 2013.

That includes Lickenbrock, who used it last April while killing time during a layover en route back to Dayton from spring break.

He followed the video instructions and attempted to "revive" the dummy. Participants are scored based on the rate and depth of chest compressions, and the placement of their hands. He failed.

"I was way too shallow on depth of compressions," said Lickenbrock.

So he tried again. And again. On the third try, he got a perfect score.

Two days later, he was driving on campus when he saw lightning strike from afar. As Lickenbrock pulled into a parking lot, he saw a group gathered around a student lying on the ground.

The bolt had knocked Ferguson off his feet and into a parked car, breaking his jaw. Bystanders called 911, but he had no pulse and wasn't breathing. Lickenbrock was the first to administer CPR, which he continued until medics arrived.

Ferguson suffered burns on 35 percent of his body. His grueling recovery included learning to walk again because the nerves in his legs were shattered. But the 24-year-old marketing major returned to campus just a few months later and graduated in December.

"If it weren't for that kiosk, I wouldn't be here today," said Ferguson, who lives in the Pittsburgh suburb of Allison Park, Pennsylvania.

The kiosks are sponsored by the American Heart Association and the Anthem Foundation, the philanthropic arm of health insurer Anthem Inc.

Indianapolis airport Fire Chief Rick Gentry said he's been waiting for two years to get one of the machines, which he called "very easy to use."

"If you can do compressions ... you're doing better than somebody that doesn't do anything and just stands by," Gentry said. "So it'll give people confidence to be able to do it."

"I'm a regular guy and I learned CPR in essentially 10 minutes and saved a life," he said. "That means anyone else can do the same thing."