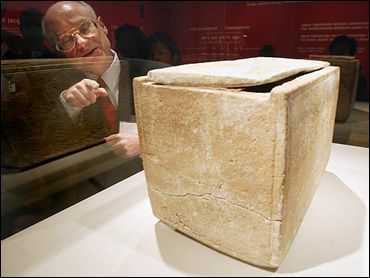 An artifact said to be one of the most important archaeological discoveries ever has turned out to be a fake.

The inscription "James, son of Joseph, brother of Jesus" on an ancient stone burial box caused a stir last year, reports CBS News Correspondent Robert Berger, because it was said to be the oldest reference to Jesus outside the Bible. But Israeli experts announced Wednesday that "the inscription is a forgery."

Gideon Avni of the Israeli Antiquities Authority said the box is authentic and dates back 2,000 years, but the inscription was forged in recent times.

"The inscriptions, possibly inscribed in two separate stages, are not authentic," the Antiquities Authority said in a statement.

The James inscription cut through the ancient limestone box's patina, a thin coating acquired with age, the experts said, proving the writing was not ancient.

Avni said the decision by the authority was unanimous.

In the Bible, Matthew 13:55 refers to James as Jesus' brother. He later became head of the church in Jerusalem, according to the New Testament.

Oded Golan, the Israeli owner of the ossuary, dismissed the officials' findings as "wrong."

However, Biblical language professor Avigdor Horowitz, who served on one of the investigating committees, said not one inscribed passage on the tablet was without a linguistic mistake.

"The person who wrote the inscription was a person who thinks in modern Hebrew," he told a news conference in Jerusalem. "A person thinking in biblical Hebrew would see it as ridiculous."

The Israel Antiquities Authority and the Jerusalem police launched separate investigations into the two items after Golan offered one for sale.

The Yoash inscription is a shoebox-sized tablet from about the ninth century BC inscribed with 15 lines of ancient Hebrew with instructions for maintaining the Jewish Temple in Jerusalem.

When it was first disclosed two years ago, it caused a stir in the archaeological world, with some experts calling it a rare confirmation of biblical narrative.

The existence of the James ossuary was revealed last November at a news conference in Washington by the Biblical Archaeology Review.

Israel Antiquities Authority head Shuka Dorfman said the ossuary itself was not examined because its authenticity as an ancient burial box was not in question. The practice of reburying Jewish remains ended around A.D. 70.

"The box is original; probably we have in our storeroom hundreds of the same or similar ossuaries. The inscription is false," he said.

The artifact had been valued at $1 million to $2 million, based on the claimed link with Jesus.

Golan said he bought the James ossuary in the mid-1970s from an antiquities dealer in the Old City of Jerusalem for about $200, but he said he could not remember the dealer's name.

However, antiquities inspectors, who have questioned several Old City dealers, were also checking suspicions Golan bought the ossuary only a few months ago. In such a case, those involved in the sale could be prosecuted for dealing in stolen goods.

The police investigation into how the box was acquired will continue regardless of the committee's findings.

Dorfman said the antiquities experts made a purely scientific examination of the artifacts, without trying to prove or disprove any allegations against Golan.