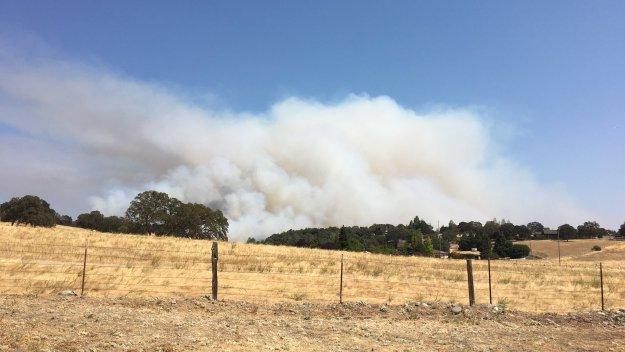 SAN ANDREAS, Calif. -- Fire officials in southern California say a car driven by a woman high on drugs has sparked several wildfires that so far have burned 450 acres and prompted evacuations.

Authorities say Renee Hogan was arrested Sunday. The California Highway Patrol tells KCRA-TV that Hogan was driving on the right rear rim of her 2002 Kia Rio, which was emitting sparks that caused the blaze. KCRA reports no buildings have burned, but some people have been forced to leave their homes. Hogan’s car was torched by the flames.

The state Department of Forestry and Fire Protection says it has filed additional charges against Hogan related to the fires.

Resident Meredith Brooks told CBS Sacramento that the fire started after she heard a loud screech on her street.

“So when it went by, it was a car with the right rear wheel burning, not sparking, burning,” she said.

Brooks told CBS 13 she saw the fire start on the corner across from her home. Watching her trees burn, brings back a flood of memories from last year’s Butte Fire.

“It is devastating, we just got this property last year, just before the Butte Fire,” Brooks said.

Nancy Longmore, spokesperson for CalFire’s Tuolumne-Calaveras Unit, said at least one home sustained some damage from the fire and has a reminder for homeowners in the area to stay proactive.

“It’s not too late to do your defensible space around your home, if you haven’t done it yet, get out and do it,” Longmore said.