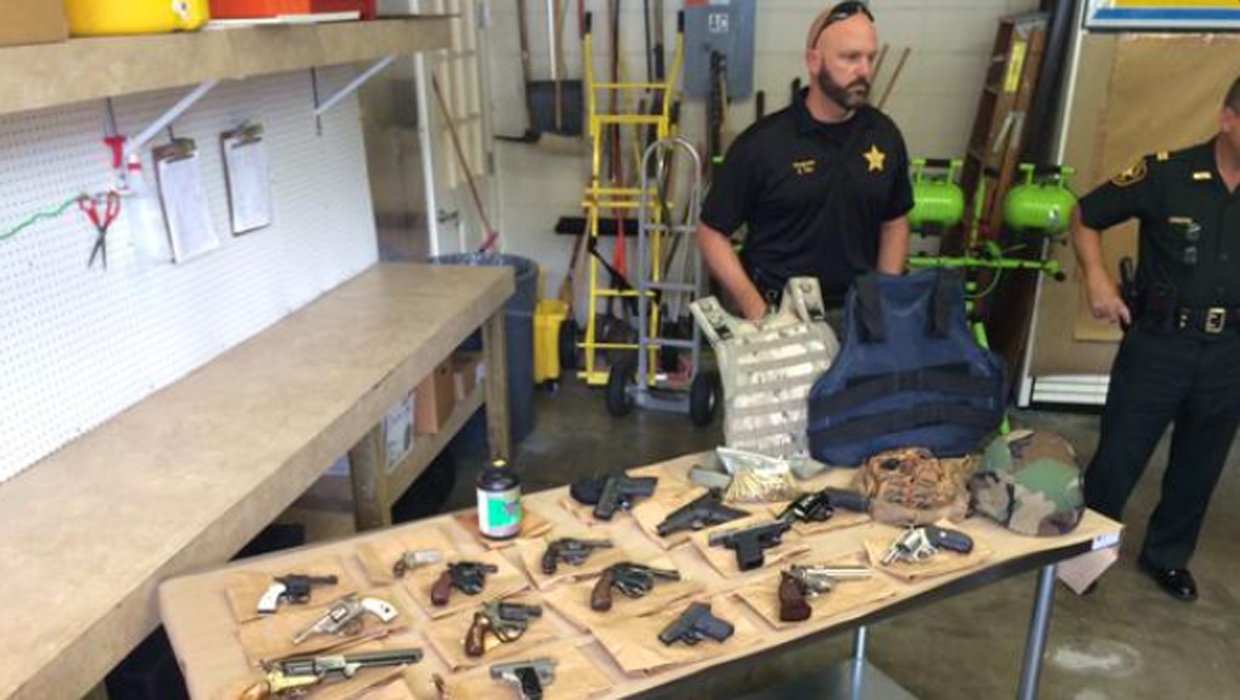 UMATILLA, Fla. -- Sheriff's deputies in Marion County, Fla., uncovered 22 firearms in a shed Friday after receiving a tip that weapons including a possible "rocket propelled grenade launcher" and missiles were being stored there in preparation for a Monday attack on the Eustis Police Department.

While they found no evidence of a grenade launcher, police say they were able to confirm almost every other aspect of the tip, which came in from an inmate at the Lake County Jail, officials said at a press conference Monday.

"You can't sit on a tip like this," Marion County Sheriff Chris Blair told reporters Monday, as officials displayed the weapons and drugs they uncovered.

The tipster led officials to the shed on a 9-acre property in Umatilla in central Florida, about 50 miles northwest of Orlando, where officials found 22 firearms, several containers of black powder, over a pound of marijuana, powder and crack cocaine, prescription pills, scales, 2 bullet proof vests, and other drug paraphernalia, according to the Marion County Sheriff's Office.

The firearms included handguns and four long rifles, officials said Monday. Police also uncovered a "large amount" of handgun and rifle ammunition and a device they said could be some type of pressure switch.

Local police were working with the ATF to determine the nature of the device.

The tipster told police that occupants of the shed were planning an attack Monday on police in nearby Eustis after recent "run-ins" with officers there, according to the sheriff's office. An attack was also planned on a church and an Elks lodge in the southern portion of the county, officials said Monday.

Police said they determined the threat had credibility and moved to execute a search warrant on the shed Friday. They said they arrested two suspects inside -- Christopher Conger and Jeremy M. Robertson --who claimed to have no knowledge of any planned attack.

It wasn't immediately clear whether Robertson and Conger face charges in connection to the arsenal uncovered in the shed.

Eustis Police Chief Fred Cobb told CBS affiliate WKMG he was blindsided by the threat because his department had little to no contact with the two men.

Cobb told the station Conger had been arrested by Eustis police on a violation of probation warrant, and his department had received a tip that Robertson was known to carry drugs and weapons.

Officials said they are still trying to track down the owner of the property, but they said they don't have anything right now to connect him to the case. They were still looking for another person they said was nicknamed "Rhino," but didn't have more information about the person.