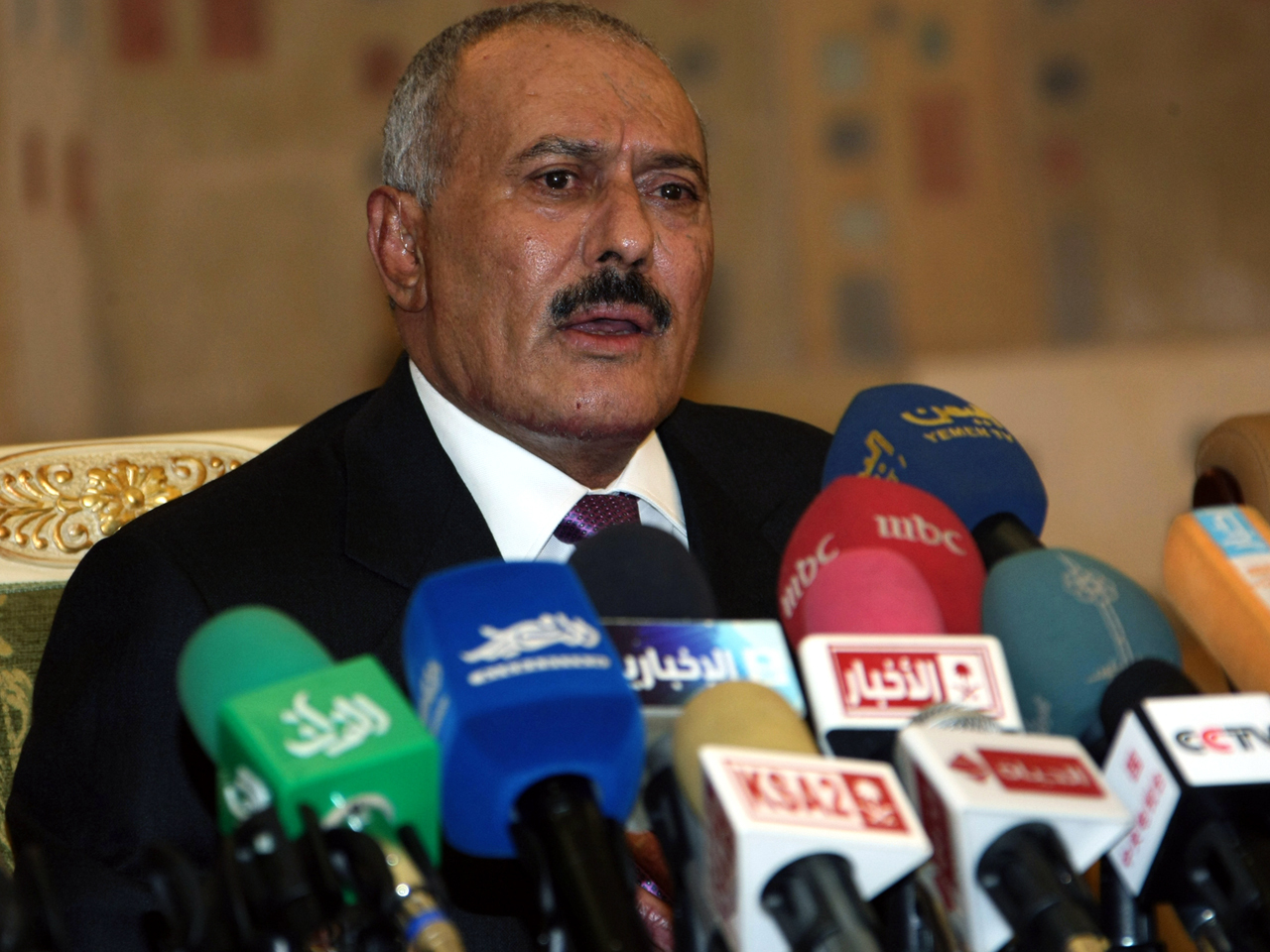 WASHINGTON - The Obama administration is engaged in an intensive effort with Yemen's embattled strongman Ali Abdullah Saleh to find him a new home, preferably not in the United States, so that his violence-wracked Arabian homeland can proceed with a transition to democracy, U.S. officials say.

President Barack Obama's counterterrorism adviser, John Brennan, is leading the diplomacy, which appears to have gained steam this week when Saleh sought out U.S. Ambassador Gerald Feierstein in the capital, Sanaa, to discuss where he could go. The meeting came shortly after Secretary of State Hillary Rodham Clinton called out Saleh for not living up to his commitments to leave Yemen and allow elections ending his 34-year dictatorship, the officials told The Associated Press on Thursday.

But Saleh has few options, leaving the administration in a bind as it tries to find a nation willing to host a wily leader accused of committing gross human rights violations over a year of internal conflict. The 69-year-old leader may have transformed himself from a firm Arab ally of Saddam Hussein into a vital counterterrorism ally of the United States, but even Washington doesn't want to be the one forced to provide him a new home.

The administration's unwillingness in part reflects the shifting U.S. foreign policy calculus prompted by the Arab Spring. Political asylum for Saleh in the United States, or the appearance of preferential treatment from an administration that has championed peaceful and democratic change, would be highly unpopular with Yemeni political groups likely to take part in future governments. It also could anger people across the Arab world fighting to oust corrupt and authoritarian rulers.

Despite agreeing last year to transfer power to his vice president ahead of planned February presidential elections, Saleh is continuing to wield power behind the scenes and frustrate the efforts of Yemen's would-be reformers. Talk from Saleh allies about possibly postponing next month's vote has only further enraged Yemen's opposition. Meanwhile, al Qaeda has taken advantage of the political instability to enlarge its foothold in the country.

Al Qaeda's advance, in particular, has Washington on alert. Brennan and other officials are looking for ways to remove Saleh from Yemen as soon as possible so Yemen's political elites can get back to the business of fighting terrorists instead of each other. Earlier this week al Qaeda's Yemen-based branch seized the town of Radaa, an outpost 100 miles south of the capital and a key gateway to the regional center of Zinjibar, which has been under the terror group's control since last spring.

Without an end to the power vacuum in Yemen, officials fear al Qaeda in the Arabian Peninsula will be able to raise funds, win recruits and increase the possibility of another international terrorist attack. The group is blamed for trying to blow up a Detroit-bound airliner on Christmas 2009 and cargo planes bound for the United States a year later.

Speaking on condition of anonymity to discuss ongoing sensitive diplomacy, U.S. officials said Saleh has resubmitted a visa application to enter the United States and that the administration is actively considering his request. Fearful of appearing to harbor an autocrat with blood on his hands, the U.S. has withheld approval for a visa since December when Saleh asked to visit the U.S. to get medical treatment for injuries he sustained in a June assassination attempt.

Officials had demanded assurances that Saleh wouldn't remain in the country, but acknowledge now that if they let him into the United States it would be to stay. They said no final decision has been made.

Saudi Arabia and the United Arab Emirates already have rejected Saleh, officials said. They said other possibilities are still out there, but if no country steps forward the United States might be forced to choose between Yemen's future stability and America's own popularity in the Middle East. In that case, the administration likely would let Saleh in, administration officials said.

Demonstrators began protesting against Saleh and calling for his ouster in February. The Yemeni government responded with a bloody crackdown, leaving hundreds of protesters dead and sparking wider violence in the capital with rival militia.

International pressure has mounted for months for Saleh to step aside. A June rocket attack on his compound left him badly burned and wounded, and led Saleh to seek medical treatment in neighboring Saudi Arabia for three months. American officials had hoped he would remain there, but the Yemeni leader returned and violence worsened.

In November, Saleh agreed to a Saudi-backed deal to hand power to his vice president and commit to stepping down completely in exchange for immunity. The deal further angered Saleh's opponents, who demanded he be tried for his attacks on protesters. While he has transferred authority, in principle, to his vice president, he has continued to pull strings in Yemen's government through loyalists and relatives still in positions of power. Many fear he'll continue to rule in practice if he remains in Yemen.

"The instability in Yemen is of great concern, first and foremost to the Yemeni people, but also to the region and to the world," Clinton told reporters this week during a trip to the Ivory Coast.

Saleh has made "agreements with respect to the way forward that have not been fulfilled," she said. "We regret that the president has thus far failed to comply with his own commitments to leave the country, to permit elections to go forward that give the people a chance to be heard and be represented."

Even before Yemen's uprising began, it already was the poorest country in the Arab world, with a weak central government, deep tribal divisions and several separate conflicts.