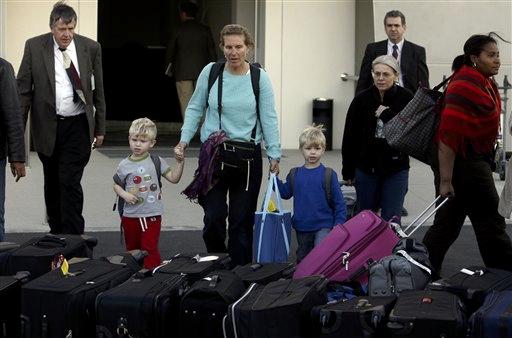 WASHINGTON (AP) - The United States has a vision for Egypt's transition to real democracy: President Hosni Mubarak ends the state of emergency that has underpinned three decades of iron rule and gives up any lasting ambitions on winning re-election.

Administration officials said Monday that the U.S. government would prefer that Mubarak, 82, not run in presidential voting scheduled for September. But they won't say that publicly for fear of destabilizing Egypt amid increased signs that the regime may fall.

The officials spoke on condition of anonymity because of the sensitivity of diplomacy and the difficult situation the Obama administration finds itself in, torn between pro-democracy protesters and an ally who has backed the U.S. for over three decades on issues from Arab-Israeli peace to counterterrorism.

Publicly, the administration would not be drawn out on the subject of Mubarak's future, officials saying only that the elections should be open and fair.

"The United States government does not determine who's on the ballot," White House press secretary Robert Gibbs said. "I don't think that people that seek greater freedom are looking for somebody else to pick what and how that change looks like."

Washington is treading a fine line in trying to smooth the way for a more representative government in Egypt. Options include Mubarak stepping aside in favor of his newly named deputy, Omar Suleiman, or announcing that he will not run for re-election in the fall. But he might try to hold on.

Gibbs dismissed Mubarak's appointment Monday of a new government in an apparent attempt to defuse the weeklong political upheaval in his country. Tens of thousands of demonstrators have flooded the streets, calling for his ouster.

"This is not about appointments. This is about actions," Gibbs said. "That's what I think people here and people around the world need to see from the Egyptian government."

The U.S. is pressing Mubarak to institute a set of reforms as a first step toward meeting the demands of protesters clamoring for his ouster. They include moves to lift emergency laws, allow nongovernmental organizations to operate and free political prisoners, the officials said. Elections would follow on schedule.

The U.S. cannot force Mubarak to accept any of those conditions, although it has leverage born of 30 years of partnership and billions in aid.

"The process has to be inclusive," State Department spokesman P.J. Crowley said. "One thing that we'll be looking at as Egypt goes through this is revocation of the emergency law."

In place since 1981, the law gives Egyptian police broad powers to arrest people and to hold them indefinitely without charge. Human rights activists say the law will is used to suppress dissent.

Beginning less than two weeks after Tunisian protesters ousted their long-time president, the Egyptian unrest has had the United States in a bind since its start.

Years of close cooperation on Israeli-Arab peace talks, pressuring Iran and counterterrorism operations has made Egypt America's most important ally in the Arab world. Slowly, the U.S. has ratcheted up the rhetoric calling on Mubarak to usher in change while publicly, at least, insisting that the situation was his to save.

But the U.S. doesn't want to give the impression that its backing for Mubarak is contingent on a small list of reforms.

Otherwise, a new dilemma could arise. If the Egyptian government meets U.S. expectations, does the Obama administration congratulate Mubarak and risk undercutting Egyptian democracy activists? Or, does it continue to press for greater reforms, potentially losing the goodwill of an ally even while it is showing some signs of becoming a democracy?

The U.S. would likely have to respond to genuine reforms in Egypt with a delicate combination of support and calls for continued action.

The situation could still dramatically escalate in the coming days. A coalition of opposition groups has called for a million people to take to Cairo's streets Tuesday to demand Mubarak's removal, but it's unclear at this point what groups are driving the movement.

Secretary of State Hillary Rodham Clinton appealed Sunday for an orderly transition to democracy and warned against a takeover resembling the one in Iran three decades ago, with a "small group that doesn't represent the full diversity of Egyptian society" seizing control and imposing its ideological beliefs.

The unspoken concern is that an Egyptian revolution could make American foreign policy dramatically more difficult in the Middle East.

In addition, the administration sent a former U.S. ambassador to Egypt, Frank Wisner, to press the U.S. case for democratic reforms with top Egyptian officials. Crowley said Wisner would report back on his findings.

The U.S. has evacuated more than 1,200 Americans from Egypt aboard government-chartered planes and expects to fly out roughly 1,400 more in the coming days. Planes ferried Americans from Cairo to Larnaca, Cyprus; Athens, Greece; and Istanbul, Turkey.

The Pentagon said Adm. Mike Mullen, chairman of the Joint Chiefs of Staff, sent a message to U.S. troops worldwide Monday saying his Egyptian counterpart, Army Lt. Gen. Sami Enan, had assured him in a phone conversation that the military will continue to be a stabilizing influence in the current crisis.

Mullen also expressed hope that the close relationship between the American and Egyptian militaries will continue after the current crisis is resolved.