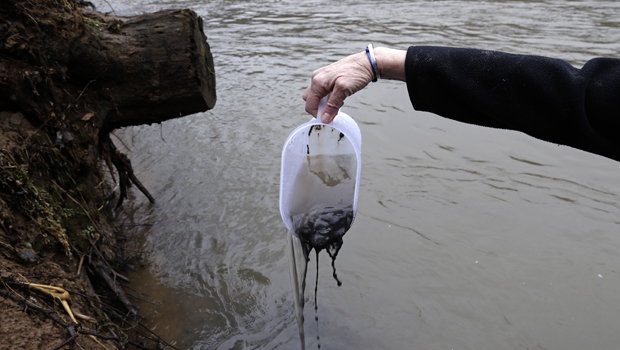 The state Department of Environment and Natural Resources ordered Duke to stop the flow of contaminated water coming out a pipe that runs under a huge coal ash dump at its Eden power plant. A nearby pipe at the same dump collapsed without warning two weeks ago, coating the bottom of the Dan River with toxic ash as far as 70 miles downstream.

State regulators expressed concern five days ago that the second pipe could fail, triggering a new spill. The water coming out of that pipe contains poisonous arsenic at 14 times the level considered safe for human contact, according to test results released by the state on Tuesday.

"We are ordering Duke Energy to eliminate this unauthorized discharge immediately," said Tom Reeder, director of the N.C. Division of Water Resources.


Video taken last week by a robot sent inside the 36-inch-wide concrete pipe showed wide gaps between seams through which groundwater is gushing in, likely from the toxic dump above.

Tests on water from the pipe before it goes under the dump showed none of the dangerous contamination detected at the other end. The concrete inside the pipe is heavily stained around the numerous leaks, suggesting the contamination is likely not new.

A state inspector received the video recorded by Duke during a Feb. 11 visit to the site, but did not review it until Thursday.  On Friday night, the state agency went public with concerns about the pipe's structural integrity.

"After reviewing the videotape, we determined that no immediate action was necessary," it said.

In the wake of the initial spill, public health officials issued advisories telling people to avoid contact with the river water and not eat the fish.

Authorities said public drinking water in Danville, Va., and other communities downstream of the Duke plant remain safe. Heavy metals detected in the river at levels exceeding state and federal safety standards - including arsenic, lead and selenium - are being successfully filtered out of water drawn from the river at municipal treatment plants, they said.

The U.S. Fish and Wildlife Service said Tuesday a massive pile of coal ash about 75 feet long and as much as 5 feet deep has been detected in the river by the site of the Feb. 2 spill. Deposits varying from 5 inches deep to less than 1 inch coated the river bottom across the state line into Virginia and to Kerr Lake, a major reservoir.

Federal authorities expressed concern for what long-term effect the contaminants will have on fish, mussels and other aquatic life.

"The deposits vary with the river characteristics, but the short- and long-term physical and chemical impacts from the ash will need to be investigated more thoroughly, especially with regard to mussels and fish associated with the stream bottom and wildlife that feed on benthic invertebrates," said Tom Augspurger, a contaminants specialist at the federal wildlife agency.

Benthic invertebrates are small animals that live in the sediments of rivers and lakes, such as clams, worms and crustaceans.

The Dan River system in North Carolina and Virginia is home to two federally listed endangered species, the Roanoke logperch fish and the James spinymussel. The river also has another freshwater mussel, the green floater, which is currently being evaluated for protection under the U.S. Endangered Species Act.

Officials said the coal ash is burying aquatic animals and their food. The ash, generated when coal is burned to generate electricity, could also clog gill tissues in fish and mussels. The agency said public reports of dead aquatic turtles at two state parks in Virginia had not yet been verified by federal biologists.

The U.S. Environmental Protection Agency has warned that increased flow in the river resulting from last week's snowfall and rain threatens to wash the toxic ash even further downstream. The Dan flows back across into North Carolina before emptying into the Albemarle Sound.

Meanwhile, Duke Energy announced Tuesday that its fourth-quarter profits jumped 58 percent after officials in North Carolina and other states approved hikes in the rates customers pay for electricity. The company had revenues of $24.6 billion for 2013.

George Everett, Duke's director of environmental and legislative affairs, told state legislators this week that the company is sorry for the spill and will be accountable.

Any costs incurred because of the cleanup will likely be passed on to ratepayers, not shareholders, he said.