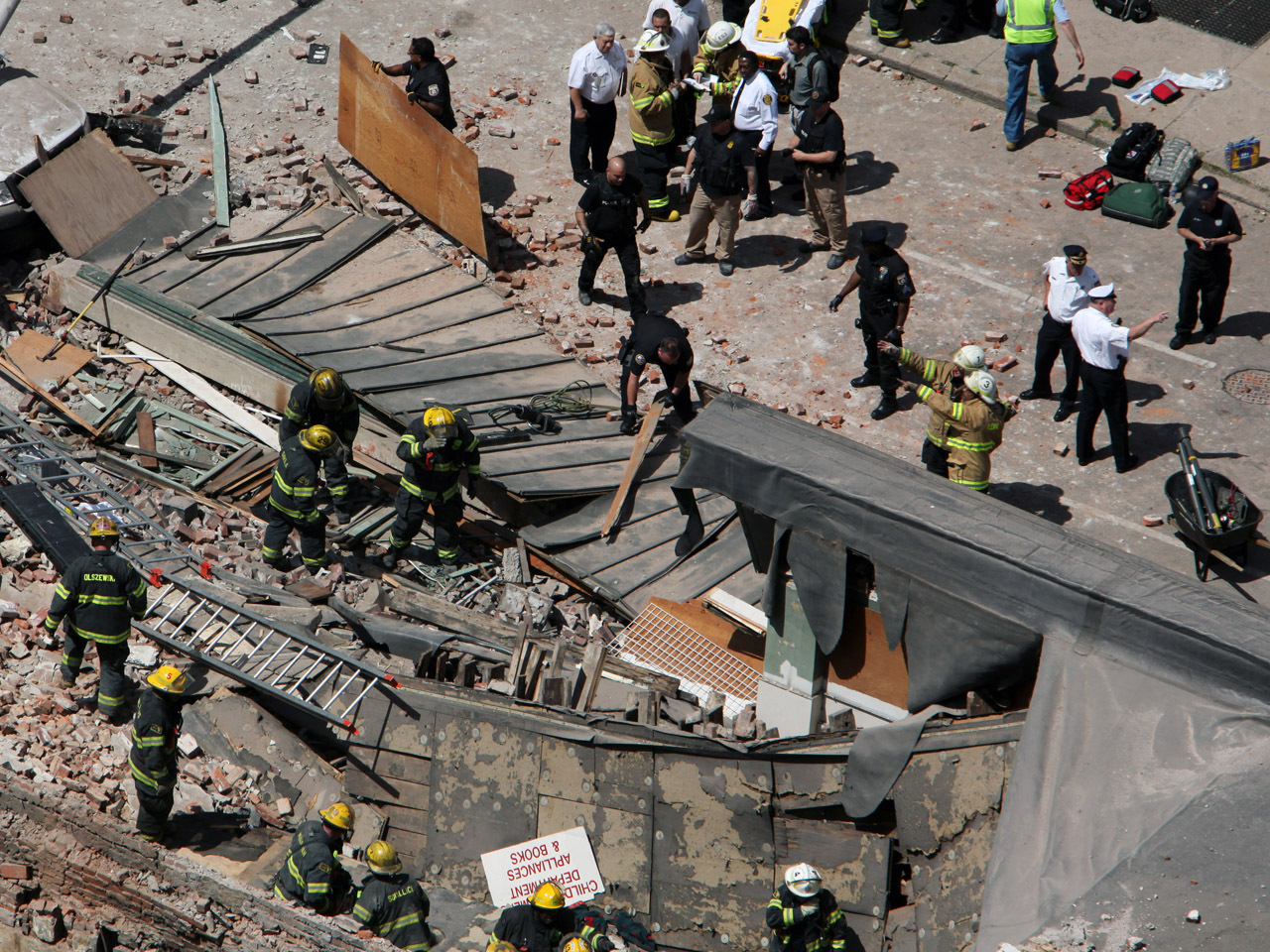 PHILADELPHIA The search for victims of a building collapse that killed six people wound down Thursday amid mounting questions about whether the demolition company that was tearing down the structure caused the tragedy by cutting corners.

The four-story building along Philadelphia's busy Market Street collapsed Wednesday onto a Salvation Army thrift shop next door with a loud boom and a huge cloud of dust, trapping employees and others, including a woman on her first day on the job at the store.

"Buildings get demolished all the time in the city of Philadelphia with active buildings right next to them. ... They're done safely in this city all the time," Mayor Michael Nutter said. "Something obviously went wrong here yesterday and possibly in the days leading up to it. That's what the investigation is for."

Despite Nutter's reassurances, Philadelphia began inspecting hundreds of demolition sites in the wake of the collapse. The Department of Licenses and Inspections said it had 300 open demolition permits throughout the city; inspectors had visited about 30 of the sites by Thursday afternoon and planned to get to the rest by next week.

The spot inspections included all four construction and demolition sites connected to Griffin Campbell Construction, the demolition contractor involved in Wednesday's deadly collapse. The city found violations at two sites and ordered a halt to the work.

As details of Campbell's checkered legal and financial past came to light, a city councilman charged that dangerous, under-the-radar tear-downs are taking place throughout the city and demanded a stricter application and inspection process for demolition companies.

More than 24 hours after the collapse, the search for the dead and injured was nearly complete, with no one else believed to be in the rubble. Firefighters hosed down piles of bricks to reduce the dust, and heavy machinery scooped up debris.

Rescue efforts were buoyed early Thursday when a woman was pulled out alive and conscious after 13 hours under the rubble. Nyra Plekam was hospitalized in critical condition and was said to be floating in and out of consciousness. At least 12 others were hurt, many with minor injuries, and five remained hospitalized.

"That's why we stay the course," fire Commissioner Lloyd Ayers said. "This person being pulled out alive is what this rescue operation is all about."

Meanwhile, the Salvation Army said two of its employees were among the six people killed. Lt. Col. Timothy Raines said the agency is "deeply saddened by the tragic loss of life." He said in a statement Thursday night that The Salvation Army has been in touch with the families of the dead "to offer emotional and spiritual support."

Officials from the U.S. Department of Labor and Occupational Safety and Health Administration were at the scene.

The mayor said he was unaware of any complaints about the demolition work done by Campbell in the days before the tragedy. But OSHA said it had gotten a complaint May 15 that workers at the site were at risk of falling. The complaint was still open at the time of the disaster, U.S. Labor Department spokeswoman Leni Uddyback-Fortson said.

OSHA regulates the demolition industry and enforces standards meant to ensure worker safety. Among other things, its regulations forbid any wall section exceeding one story to stand alone without bracing, unless the wall was designed that way. Witnesses have said they saw a 30-foot section of unbraced wall before the collapse.

Civil engineers not directly involved in the demolition accident told CBS radio station KYW that they believe two key changes could have prevented the tragedy: the wall should have been temporarily supported, and the neighboring thrift shop should have been evacuated.

Also, a video of the demolition taken Sunday and posted on YouTube showed bricks raining down on the sidewalk as a worker used a backhoe and claw to remove a second-story front wall.

The sidewalk and the staircase leading up from a subway stop appeared open to pedestrians despite the falling bricks. Cars and trucks could also be seen going past, just a few feet away.

That appeared to violate OSHA regulations that say "no material shall be dropped to any point lying outside the exterior walls of the structure unless the area is effectively protected."

A permit issued by the city indicated that Campbell was to be paid $10,000 for the demolition work, a seemingly low price given the location and scope of work.

Demolition company owner Griffin Campbell, who has been arrested on charges involving drugs, assault and insurance fraud and has had two bankruptcy filings, did not return calls for comment Thursday.

Dominique Lee, who answered the door at Campbell's home in Philadelphia and identified herself as his daughter, said he wasn't home but that he was "devastated. He's mourning the loss of those people just like everyone else."

Demolition experts said Campbell, at the very least, should have asked the Salvation Army to clear out for the most delicate portions of the tear-down.

"It seems odd," said Michael R. Taylor, executive director of the National Demolition Association, a trade group that represents 75 percent of all demolition contractors. Campbell was not among its members. "Why wouldn't you tell the Salvation Army guys to close their thrift store until the adjoining building was down?"

Robert Brehm, a construction engineer who teaches at Drexel University, said he would have evacuated the building "not because I expected the wall to fall on the one-story, but it is a predictable outcome. Sometimes it doesn't fall the way you want it to fall." If the store had been cleared out, he said, "we wouldn't be talking."

Several City Council members called for a review of the demolition application and inspection process.

"This is happening all over the city," Councilman James Kenney said. "I need to know who the workers are who are there, what they know, what they don't know, how they've been trained."

The city does check the condition of buildings to be torn down before demolition can begin — and inspects them again after the tear-down is finished — but does not require an inspection during demolition. A pre-demolition inspection at the site on May 14 turned up no issues, said Carlton Williams, head of the city's Department of Licenses and Inspections.

CBS Station KYW Philadelphia reported that the city's district attorney, Seth Williams, released a statement that included: "It is premature to assign criminal responsibility, but at the appropriate time we will conduct a thorough review of all the facts and evidence that resulted in such a tragic loss of life."

Among those killed was Borbor Davis, an immigrant from Liberia who loved working at the thrift shop, adored his wife and attended church faithfully, said his stepdaughter Maryann M. Mason.

"He did the right thing; he went to work," she said. "That's what everybody is supposed to do."

Another victim, 18-year-old Anne Bryan, was a student at the Pennsylvania Academy of the Fine Arts and had been shopping at the thrift store. The school described her as "dynamic, inquisitive and smart."

Also killed was Kimberly Finnegan, 35, who had just transferred to the store after working for about a year at a Salvation Army shop in another part of the city.

"It was her first day at work there," said Heather Sizemore, a friend. "She was awesome. She was a really loving person."