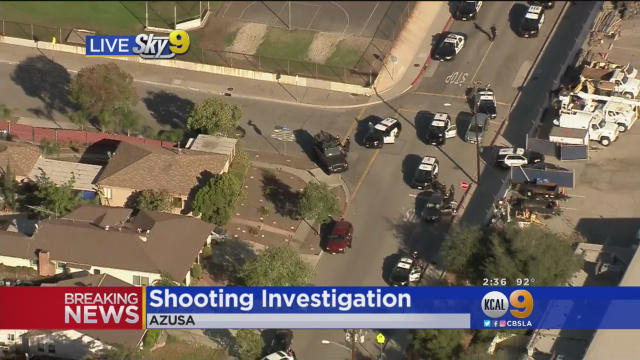 AZUSA, Calif. -- Someone with an assault rifle killed one person and wounded two others Tuesday near two Los Angeles-area polling sites that were locked down as a result.

The suspect then began shooting at arriving officers who returned fire before they took cover near a park, Azusa police Chief Steve Hunt said.

One person was down at the front door of a home but Hunt couldn’t immediately say whether that person was the shooter.

Police Officer Jerry Willison said the person was believed to be dead.

Elections officials say one of the polling sites later reopened. Voters were being urged to seek nearby polling places.

The motive of the shooting was unknown and it was unclear if it had anything to do with the election.

“It’s still too early to tell,” Hunt said. “It appears to be concentrated on the residential side, not the polling station.”

No officers were hurt.

Hunt said police were looking for a female suspect. He did not know if she had been wounded or killed in the exchange of gunfire with police.

Witnesses described the shooter as a man, and police could not immediately clear up the confusion.

One victim was pronounced dead, two victims were air lifted to a hospital and a fourth remains unaccounted for, Los Angeles County Fire Department Inspector Gustavo Medina told CBS News -- it wasn’t immediately clear whether the person was still on scene or transported via ambulance to a medical center. Two of the victims were in critical condition, Azusa police said via Twitter.

Azusa police say the incident began shortly after 2 p.m. when officers responded to the report of shots fired in a residential neighborhood.

The gunman reportedly then holed up in a home which was surrounded by SWAT personnel, the station reports.

The L.A. County Registrar tweeted the shooting investigation was impacting two polling places -- Memorial Park and Dalton Elementary. The tweet advised voters to avoid the area and if necessary, cast their ballots at an alternate polling location. By 5 p.m. PST, Dalton Elementary had re-opened.

The shooting occurred near Slauson Middle School, which was placed on lockdown.

Azusa is about 25 miles east of downtown Los Angeles.