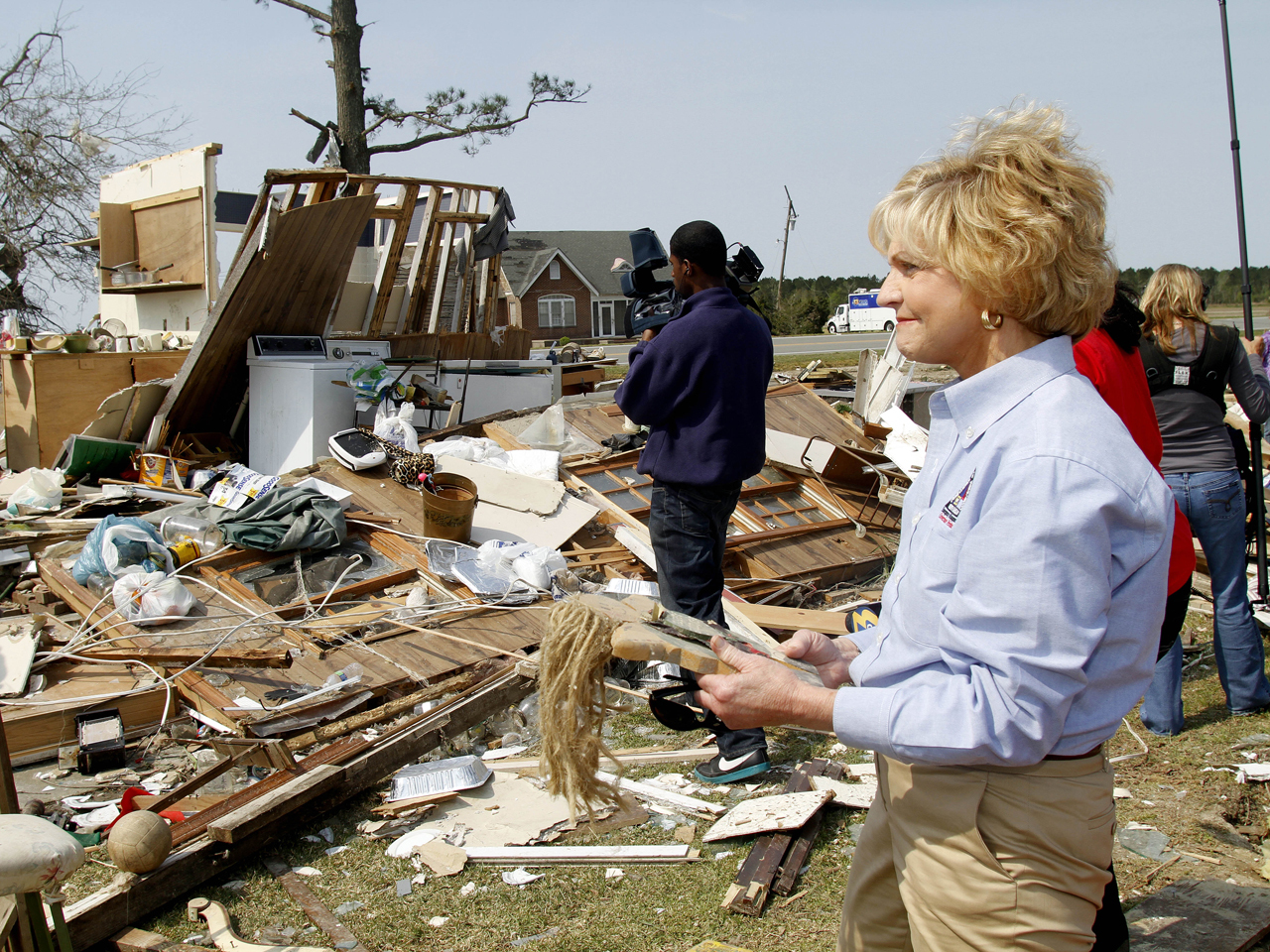 SANFORD, N.C. - Lowe's store manager Michael Hollowell had heard the tornado warnings but his first clue that the danger was outside his front door came when he saw his staff running toward the back of the home improvement store.

More than 100 employees and customers screamed in near unison when the steel roof curled off overhead Saturday. The store was becoming part of the wreckage left by a ferocious storm system bristling with killer twisters that ripped through the South.

"You could hear all the steel ripping. People screaming in fear for their lives," Hollowell told The Associated Press on Sunday.

Those in the store did not become part of the death toll that totaled at least 45 across six states, and officials said quick action by Hollowell and his employees helped them all make it out alive in Sanford, about 40 miles south of Raleigh.

There won't be time for people in this area to recover from this round of deadly weather because forecasters say another potentially deadly storm system is now forming - and it could trigger as early as Tuesday, reports CBS News correspondent Cynthia Bowers.

In all of Lee County, where Sanford is located, officials said there was just one confirmed fatality during the storm, which claimed at least 21 lives statewide, damaged hundreds of homes and left a swath of destruction unmatched by any spring storm since the mid-1980s.

In Raleigh early Monday, authorities were blocking access to a mobile home park of about 200 homes where three children were killed. Officials planned to assess conditions after sunrise before deciding whether to allow residents to return home.

Power lines and trees still covered nearby roads. Where roads were clear, there were massive piles of debris that had been pushed to the side of the street.

Gov. Beverly Perdue said Monday morning on NBC's "Today" show that she'd never seen anything like the devastation, saying it appeared that homes had been handled like paper doll houses. Search-and-rescue teams were still operating all over the eastern part of the state, and federal officials were beginning their damage assessments, she said.

"The good news is that the tornados have left and things are brighter today in North Carolina," Perdue said.

The violent weather began Thursday in Oklahoma, where two people died, before cutting across the Deep South on Friday and hitting North Carolina and Virginia on Saturday. Authorities said seven people died in Arkansas; seven in Alabama; six in Virginia; and one in Mississippi. North Carolina's state emergency management agency said it had reports of 23 fatalities from Saturday's storms, but local officials confirmed only 21 deaths to The Associated Press.

Montgomery County, Maryland, firefighters rescued a woman clinging to a tree in the Potomac river. There have been several rescues in that section of the Potomac Monday, as high waters have created dangerous conditions.

Watch video of the rescue below:

In the Bladen County community of Ammon, about 70 miles south of Raleigh, Audrey McKoy and her husband Milton saw a tornado bearing down on them over the tops of the pine trees that surround the seven or eight mobile homes that make up their neighborhood. He glanced at a nearby farm and saw the winds lifting pigs and other animals in the sky.

"It looked just like 'The Wizard of Oz,"' Audrey said.

They took shelter in their laundry room, and after emerging once the storm had passed, were disoriented for a moment. The twister had turned their mobile home around and they were standing in their backyard.

Milton found three bodies in their neighborhood, including 92-year-old Marchester Avery and his 50-year-old son, Tony, who died in adjacent mobile homes. He stopped his wife from coming over to see.

Bowers reports that no place took a harsher blow than tiny Bertie County, population 20,000, where 11 people were killed, including Kim Lafferty's in-laws.

"I just had a gut feeling when I couldn't get them on the phone," Lafferty told CBS News. "I knew how close it had hit."

Jean Burkett lived near Roy and Barbara Lafferty and Barbara's mother, Helen White, in Colerain. Burkett and Barbara Lafferty graduated from high school together in 1964 and had always been neighbors. On Sunday, at her relatively untouched home, Burkett pointed out a row of four or five about 400 yards away that had been demolished. The Laffertys and Helen White died in their home.

"The neighborhood has lost some mighty fine neighbors," Burkett said. "It's the worst thing we've ever seen."

The storms crushed trailer parks and brought life in the center of the state's second-largest city to a virtual standstill. It was the worst outbreak in the state since 22 twisters in 1984 killed 42 people.

Perdue planned to tour hard-hit areas in three counties Monday. The devastation she saw Sunday left her near tears, she said. The storm pummeled bustling cities and remote rural communities. One of Perdue's stops was downtown Raleigh, where fallen trees blocked major thoroughfares and damage to the Shaw University campus forced it to cancel the remainder of its spring semester.

Perdue said she'd been in contact with President Barack Obama, who pledged his support, and that federal emergency management workers were already on the ground.

"We have in North Carolina a tremendous relationship with our federal partners, and have been through this so many times," she said. "That's not a good thing. That's a bad thing."

The atmosphere was unstable Saturday, which allows air to rise and fall quickly, creating winds of hurricane strength or greater. There was also plenty of moisture in the air, which fuels violent storms. Shear winds at different heights, moving in different directions, created the spin needed to create tornadoes, Sharp said.

Many of the deaths across the state occurred in mobile homes like the ones in Ammon. The three deaths in Raleigh were in a mobile home park about five miles north of downtown, which was still closed off to residents early Monday.

Census data from 2007, the latest available, estimates 14.5 percent of residences in North Carolina are mobile homes, the seventh highest percentage in the nation and well over the U.S. average of 6.7 percent.

Back at the Lowe's store, Joseph Rosser and his 13-year-old daughter, Hannah, had pulled their Chevrolet Colorado pickup off the road Saturday, seeking shelter. Instead, the store's exterior concrete toppled, crushing the truck's cab with both inside.

"I really didn't see much because I had a pillow over my face to protect my head and I heard my dad tell me it was going to be OK," Hannah said. "And then all of a sudden, I just heard a loud boom.

"My dad was lying there, telling me he was going to die," said Hannah, her midsection wrapped in a back brace. "He sounded very hoarse like he couldn't breathe. He was crying and was hurt really bad."

She crawled out the truck's shattered back window and ran around the parking lot calling for help, because her cell phone wouldn't work. Both Rossers are recovering from their injuries.

While the death toll may climb and while it will be weeks before final damage assessments are completed, residents and officials alike are looking to make repairs and start building what was lost.

Aleta Tootle and four other people sheltered in a closet in her Bertie County home, emerging with only a few scratches after the rest of the building was ripped to shreds. Surveying the wreckage Sunday, she said there was only one thing left to do.