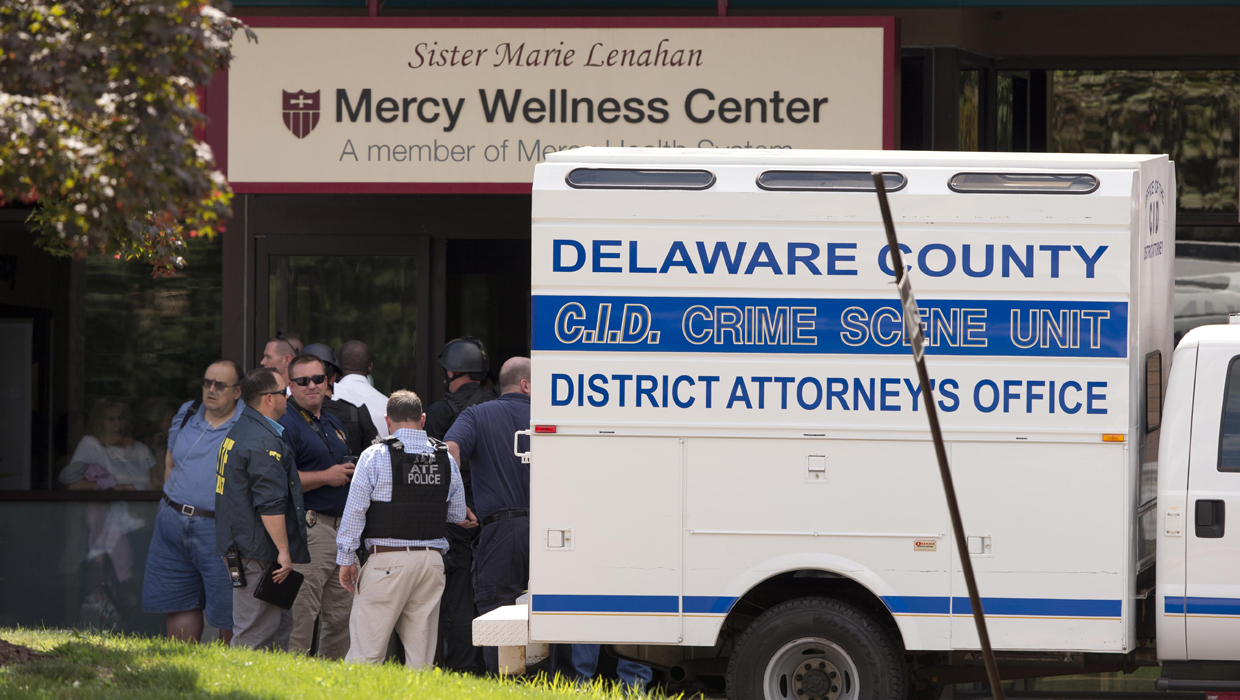 MEDIA, Pa. - A psychiatric patient ranted about a hospital gun ban before opening fire at the suburban Philadelphia medical complex, killing his caseworker and grazing his psychiatrist before the doctor pulled out his own weapon and fired back, authorities said Friday.

Dr. Lee Silverman emptied his chamber, striking patient Richard Plotts several times. Plotts by then had shot the caseworker in the face and fired several shots at Silverman, including one that grazed his temple and another that struck his thumb, officials said.

Plotts had 39 unspent bullets on him when he was wrestled to the ground at Mercy Fitzgerald Hospital in Darby, authorities say - and police believe he had planned to use them.

Plotts, 49, was sedated but in stable condition after surgery Thursday from his gunshot wounds, police said. They expect to arraign him bedside at a Philadelphia hospital on Friday, charging him with murder in the death of 53-year-old caseworker Barbara Hunt.

Plotts does not have a listed home number, and it was unclear if he has relatives in the area.

"When the caseworker was shot, (Silverman) crouched down behind the desk to avoid him being shot," Whelan said. "He was able to reach for his weapon, and realizing it was a life-or-death situation, was able to engage the defendant in the exchange of gunfire."

The struggle spilled into the hallway, where another doctor and caseworker jumped in to help Silverman and secure Plotts' weapon, Whelan said.

Police in Upper Darby, where Plotts lived, were aware of at least three mental health commitments of the suspect - once after he cut his wrists and once when he threatened suicide - but said such stays can last just one to three days.

Plotts also had at least four gun arrests, along with assault and drug charges, according to police and court records. And he has been barred from at least one residential shelter because of his violent history, Upper Darby police Superintendent Michael Chitwood said Friday.

Cathy Nickel, a neighbor at Plotts' last known address, an apartment complex in Upper Darby, saw a caseworker move him out of the building about a year ago. As he was taken away in a van, she said, he yelled, "You haven't heard the end of me!"

Plotts had complained to Silverman previously about the gun policy. He showed up nearly an hour early Thursday for a regular appointment with the doctor, whom he had last seen about six weeks ago. Silverman called the caseworker to join them, officials said.

Colleagues heard arguing during the appointment and saw Plotts aiming a gun at Silverman when they peeked inside the door. They quietly backed out and called 911. The shooting soon began, just before 2:30 p.m.

The psychiatrist was recuperating at home Friday. His wife said he did not want to discuss the shooting, and she also declined to comment.

Hospital policy bars anyone except on-duty law enforcement officers from carrying weapons on campus, a Mercy Health System spokeswoman said. She otherwise declined to discuss why Silverman was armed at work.