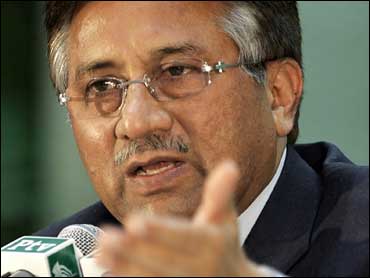 President Gen. Pervez Musharraf will step down as army chief and restore civilian rule to Pakistan, but only after he is re-elected president, a government lawyer said Tuesday.

The announcement was the first clear official statement that Musharraf is ready to end direct military rule, eight years after he seized control of the Islamic world's only declared nuclear power in a coup.

The party of exiled opposition leader Benazir Bhutto condemned the plan as unconstitutional and undemocratic and threatened to withdraw its lawmakers from parliament unless "steps for national reconciliation" are taken.

Musharraf plans to win a new five-year term in a vote by all federal and provincial lawmakers due by Oct. 15, a month before the end of his current term.

However, his popularity and authority have waned after a failed attempt to fire the Supreme Court's top judge and his political foes insist he is ineligible to continue as head of state.

He also faces a wave of violence blamed on Taliban and al Qaeda militants which has intensified discontent with his alliance with the United States. Fifteen soldiers and 14 militants were killed Monday in a militant attack on an army post near the Afghan border.

Sharifuddin Pirzada, a government attorney, announced Musharraf's intentions in the Supreme Court as judges heard petitions challenging his dual role as president and army chief and his eligibility for the presidential vote.

"If elected for the second term as president, Gen. Pervez Musharraf shall relinquish charge of the office of the chief of army staff soon after election, but before taking the oath of office of the president of Pakistan for the next term," Pirzada said.

Mushahid Hussain, secretary-general of ruling Pakistan Muslim League-Q party, predicted Musharraf's decision "will lower the political temperature and it will deprive the opposition of a major contentious issue."

Musharraf's military role "had undermined Pakistan's international image because people said you don't have full democracy. I think we have moved on," Hussain said.

Information Minister Mohammed Ali Durrani said Musharraf was assured of a majority in the current assemblies.

However, opponents said they would continue their campaign against Musharraf's continued rule.

"He is blackmailing. This is a threat from him. He is saying that first you elect me as the president and then I will quit as the army chief," said Zafar Ali Shah, a leader of the party of Nawaz Sharif, who was ousted as prime minister in the 1999 coup.

Authorities deported Sharif back into exile in Saudi Arabia when he tried to return last week to campaign against Musharraf.

Opposition parties are challenging the legality of Musharraf's re-election, including a rule change announced Monday by the Election Commission opening the way for the general to seek a new term without resigning from the army first.

Zaffar Abbas, resident editor in Islamabad for the Dawn newspaper, said the general's decision had sent a message to the Supreme Court he planned to restore civilian rule and was a coded appeal to Bhutto, who plans to make a triumphant return to Pakistan on Oct. 18, for support after parliamentary elections due by January.

For months Musharraf and Bhutto have been discussing a possible power-sharing deal, but talks have stalled amid opposition from hard-liners in the ruling coalition who could be eclipsed if Bhutto's liberal Pakistan People's Party wins the general election.

Abbas said he believes those negotiations would be revived, but Bhutto's party reacted icily to Tuesday's announcement.

"General Musharraf's decision to get himself re-elected in uniform is both unconstitutional and undemocratic," said Sherry Rehman, the party information secretary.

Rehman said the party's lawmakers might resign in protest unless the government dropped corruption cases against Bhutto and other politicians and let her run for a third term as prime minister.