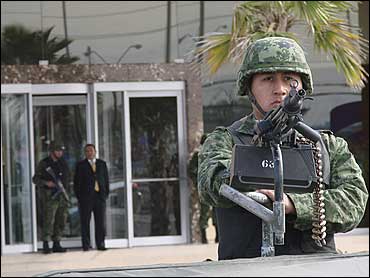 Rufe, echoing comments a day earlier from President Barack Obama, said now is not the time to militarize the southwest border.

"We would take all resources short of DoD and National Guard troops before we reach that tipping point," Rufe told lawmakers. "We very much do not want to militarize our border."

Rufe said military forces would be called in only when homeland security and other government agencies are overwhelmed. He did not specify what circumstances would trigger a call for troops.

The Mexican government has deployed 700 extra federal police to Ciudad Juarez, a city bordering Texas where local police have been overwhelmed by drug violence. Earlier this month, 3,200 federal troops were sent to the city.

Mexican officials say the violence killed 6,290 people last year - and more than 1,000 in the first eight weeks of 2009. Warring drug cartels are blamed for more than 560 kidnappings in Phoenix in 2007 and the first half of 2008, and killings in Atlanta, and Birmingham, Ala.

Rufe said while the violence along the border in Mexico is appalling, violent crimes have not increased in U.S. border cities as a result. He said kidnappings are up, but violent crime is down.

"We're not so concerned, at least at this point, about that violence spilling over into our cities," he said.

Further, the Homeland Security Department's attache to Mexico said the violence in Mexico is not as dangerous to U.S. tourists as has been portrayed.

Earlier this month, the Bureau of Alcohol, Tobacco, Firearms and Explosives warned college students on spring breaks not to travel to parts of northern Mexico because it was too dangerous.

In February, the State Department advised travelers to avoid areas of prostitution and drug-dealing in Mexico.

Meanwhile, Vice President Joe Biden announced the appointment of Seattle Police Chief Gil Kerlikowske as the next drug czar, a post that will be particularly concerned with violence in the Southwest.

As director of the Office of National Drug Control Policy, Kerlikowske will help develop and put in place a strategy to stem the Southwest border violence, Biden said in introducing the man President Barack Obama wants to coordinate the nation's drug policy.