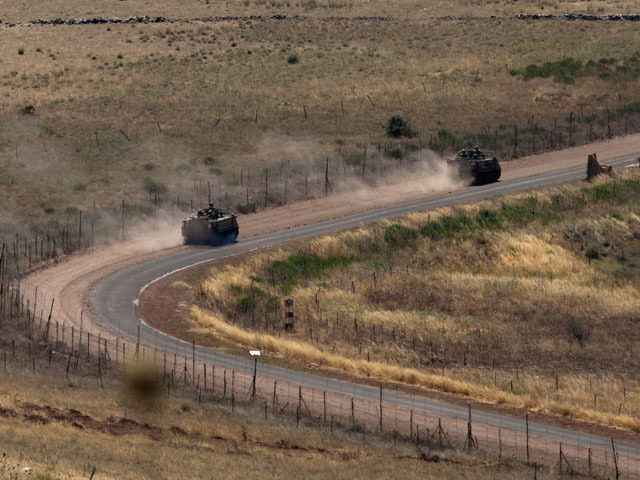 JERUSALEM (CBS/AP) - Israelis rushed to get government-issue gas masks Wednesday, the latest sign of mounting fears that Syria's chemical weapons stockpiles could be used against them as the crisis there deepens.

Until a few days ago, the possibility of getting dragged into Syria's civil war was not a major issue in Israel, whose leaders have had a laser-like focus on the potential threat posed by Iran's suspect nuclear program. That changed when Syrian President Bashar Assad's grip on his country turned more doubtful last week, following startling military gains by rebels and a bomb attack that killed four top officials.

Syria on Monday threatened to unleash chemical and biological weapons if the country faces a foreign attack.

Besides biological agents such as anthrax, Syria is believed to have hundreds of tons worth of chemical weapons ranging from paralyzing nerve agents like Sarin and VX to old-fashioned blister agents like mustard gas, CBS News correspondent David Martin reports. They can be launched by missiles, fired by artillery, or dropped from airplanes. It would take more than gas masks to protect against them

Reflecting the fears, Israeli officials reported a run on gas masks in recent days. Demand has almost doubled in the past few days, to 4,200 requests on Tuesday from a years-old average of about 2,200, said Merav Lapidot, a spokeswoman for the Israeli postal service, which distributes the masks.

Israeli officials are most worried about the possibility that the weapons could fall into the hands of Islamic militants from Lebanon's Hezbollah or other groups should the regime fall.

"For us, that's a casus belli, or red line," Israeli Foreign Minister Avigdor Lieberman said Wednesday. He told Israel Radio that the government would act immediately to prevent that from happening as tensions rise along Israel's northern border.

The fighting also has hit too close for comfort with the thud of exploding mortar shells on Syrian territory near the Israeli-annexed Golan Heights, captured from Syria in 1967. That has drawn Israelis with binoculars to a strategic plateau, seeking a glimpse of the battle and expressing concern for their nearby homes.

Syria and Israel fought two wars, in 1967 and 1973, and have failed to reach a peace deal because of disagreements over the fate of the Golan Heights. However, Assad and his late father Hafez kept Syria's frontier with Israel quiet.

The Golan holds tremendous strategic importance for Israel, both as a territorial buffer that protects northern Israel, including the Sea of Galilee, and as a key water source.

Some Israeli officials fear that a power vacuum in Damascus could turn the Golan into a haven for militant groups, much as Egypt's lawless Sinai Peninsula has attracted a variety of anti-Israel radicals since the fall of longtime Egyptian leader Hosni Mubarak.

Israeli Defense Minister Ehud Barak disclosed over the weekend that he had asked the military to prepare for a possible attack on targets in Syria to secure strategic weapons in the event the Assad regime collapses. Prime Minister Benjamin Netanyahu followed suit with a similar threat.

Israel has a history of high-stakes military attacks on foreign soil.

Amid the flurry of threats and warnings this week, Israel's army chief, Lt. Gen. Benny Gantz, had a word of caution, telling a parliamentary committee that attacking Syrian weapons arsenals could have unforeseen consequences and drag Israel "into a broader offensive than planned."

There is concern that Hezbollah might launch a counterstrike if Israel were to attack a convoy transporting weapons from Syria to Hezbollah's base in neighboring Lebanon, an Israeli security official said.

It's seen as less likely Iran would join the fray and risk a major confrontation with Israel just to help out an ally, the official said. He spoke on condition of anonymity because he was not permitted to reveal sensitive deliberations on military options.

Israel's enemies have a combined arsenal of some 200,000 rockets and missiles, a large chunk of that held by Hezbollah, according to a recent estimate by the chief of Israel's military intelligence.

Hezbollah fired 4,000 rockets at Israel in a 2006 war, and Israel blames it for a series of attacks on Israeli and Jewish targets around the world, including last week's suicide bombing in a Bulgarian resort that killed five Israeli tourists.

Over the years, Syria has served as a transit point for Iranian weapons reaching Hezbollah, and the Lebanese militia is one of Assad's few remaining allies, along with Iran. Israel fears that Hezbollah could try to raid Syrian weapons arsenals under the cover of chaos ensuing from a possible regime collapse.

Shlomo Brom, a retired Israeli general, said he believes the risk of strategic weapons falling into the hands of Hezbollah or al Qaeda linked anti-Assad fighters is quite low. He noted that components of chemical weapons and their delivery systems, such as missiles or aircraft, tend to be held in separate locations, and that it would be difficult for small groups of fighters to assemble all the needed parts.

Israel should not ignore the possible dangers, but also not exaggerate them, Brom said.

Military analyst Reuven Pedatzur also played down the risk, saying he believes Israel's leaders are blowing the Syria threat out of proportion to distract the Israeli public from pressing domestic problems, such as protests against deepening poverty and two desperate Israelis setting themselves on fire this month. An imminent round of tax increases topped media coverage on Wednesday.

The first time Israel seriously prepared for possible chemical attack was during the 1991 Gulf War following threats by then-leader Saddam. The government handed out gas masks and urged Israelis to seal rooms with tape and plastic sheeting, but in the end Iraq fired several dozen Scud missiles with conventional warheads.

The lines at a gas mask distribution center Wednesday at a shopping mall in the Jerusalem suburb of Mevaseret Zion reflected similar concerns.

Gas mask filters have a limited life, and the government has distributed the protective devices off and on over the past two decades.

The Israeli postal service, which distributes gas masks at special centers, noted a sharp increase in demand this week.

On average, 2,200 masks are handed out per day, but on Monday the figure rose to 3,700 and on Tuesday to 4,200, said postal service spokeswoman Merav Lapidot. "I imagine that it is related (to Syria), because I can't think of any other reason people would all of a sudden remember to come," she said.

Some 4.2 million Israelis have masks at home, but the remaining inventory won't be enough for a population of nearly 8 million, she said. "The home front command has said time and again that the budget has run out ... and there's not enough money to buy for all."

Hezi Gavish, the owner of a hardware store in the Israeli town of Katsrin just 16 miles from the Syrian border, said he was worried.