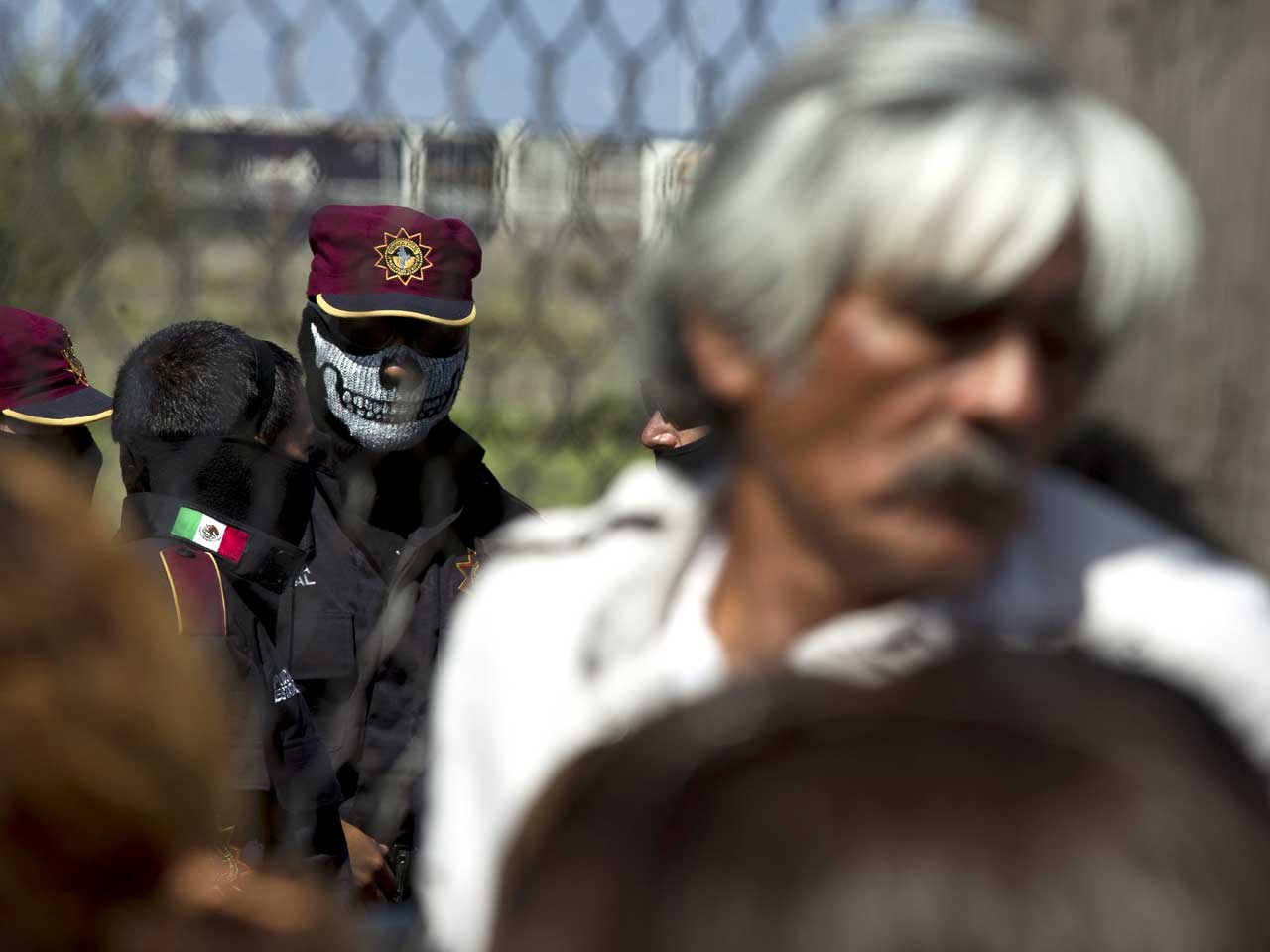 The top officials and as many as 18 guards at the Apodaca prison in northern Mexico had been detained under suspicion that they may have helped 30 Zetas escape during the confusion of a riot early Sunday in which 44 members of the rival Gulf cartel were bludgeoned and knifed to death.

Nuevo Leon state public security spokesman Jorge Domene Zambrano said nine of the guards confessed to aiding the escape. He said it appeared the breakout happened before the deadly fight.

The massacre in this northern state was one of the worst prison killings in Mexico in at least a quarter-century and exposed another weak institution that President Felipe Calderon is relying on to fight his drug war.

Mexico has only six federal prisons, and so sends many of its dangerous cartel suspects and inmates to ill-prepared, overcrowded state penitentiaries. Drug trafficking, weapons possession and money laundering are all considered federal crimes in Mexico.

"The Mexican prison system has collapsed," said Raul Benitez, a professor at Mexico's National Autonomous University who studies security issues. "The prisons in some states are controlled by organized crime."

An increase in organized crime, extortion, drug trafficking and kidnapping has swelled Mexico's prison population almost 50 percent since 2000. But the government has built no new federal prisons since Calderon launched an offensive against drug cartels when he took office in late 2006, leaving existing jails overcrowded.

Calderon's administration has renovated three existing state prisons to use as federal lockups.

Built to hold about 185,000 inmates, the prison system nationwide now holds more than 45,000 above that capacity, according to figures from the National Public Safety System.

Of the 47,000 federal inmates in the country, about 29,000 are held in state prisons. That has drawn complaints from Nuevo Leon Gov. Rodrigo Medina and other state governors, who say their jails aren't equipped to hold members of powerful and highly organized drug cartels.

The federal government counters that none of the escapes or mass killings have occurred at federal lockups, and it cites corruption on the state level, not overcrowding, as the main cause of the deaths and escapes.

"The constant element has been corruption in the control processes" at the prisons, said Patricio Patino, assistant secretary for the penitentiary system.

Prison employees say guards are underpaid, making them more likely to take bribes. And even honest guards are vulnerable to coercion: Many live in neighborhoods where street gangs and drug cartels are active, making it easy to target their families with threats.

The same can be said for Mexico's municipal police forces, another weak flank in Calderon's attack on organized crime. Thousands of local officers — often, entire forces at a time — have been fired, detained or placed under investigation for aiding drug gangs.

Nuevo Leon's governor said earlier Monday that the breakout would have been hard or impossible to stage without the help of prison authorities. Medina said no holes had been found in the perimeter walls of the prison in Apodaca, outside the northern city of Monterrey, and no armed gang had burst in to spring them.

"Unfortunately, a group of traitors has set back the work of a lot of good police," Medina said at a news conference.

An increase in prison violence and escapes is fueled in part by the increasing presence of members of highly organized drug cartels and other gangs in the prisons. In January, a fight between inmates in the Gulf Coast city of Altamira left 31 dead. A total of 171 inmates died in such violence last year, up from 45 in 2007, according to the newspaper Milenio.

Often, the riots and escapes are aided by authorities.

In the most striking case, prison corruption resulted in a massacre outside prison walls in 2010. Guards and officials at a prison in Gomez Palacio in northern Durango state let cartel inmates out, lent them guns and sent them off in official vehicles to carry out drug-related killings, including a massacre of 17 people at a rented dance hall. After carrying out the killings, the inmates returned to their cells, where they were safe from their rivals.

More typical was a prison massacre last July in the border city of Juarez that killed 17 inmates. Surveillance video showed guards standing passively by as two inmates took their keys and opened cell doors to spray bullets into a room where members of a rival gang were reportedly holding an unauthorized party, complete with women and booze.

The Zetas, with their quasi-military discipline, probably have an edge on their rivals from the Gulf cartel, said Benitez, the professor who studies security.

"Once inside, they gain control rapidly," he said.

The Zetas and Gulf cartel split in 2010 and have been fighting bloody turf battles in Monterrey and throughout much of northeastern Mexico since then.

"The prison system is just one part of the larger penal-justice system, and in Mexico the penal reform movement is going very badly," he said.

Authorities agreed there are huge problems.

"The shortcomings that exist in Mexican prisons, insufficient food, inadequate space to sleep, (poor) clothing for inmates, bad medical service, have made the prisons into places where corruption and inequality among inmates proliferates," according to a 2008 report on the nation's prisons, the federal Public Safety Department said

The report recommended legal changes to let more prisoners await trial while on bail, and the construction of more and better jails. Three years and hundreds of inmates deaths later, none of those changes have been carried out.