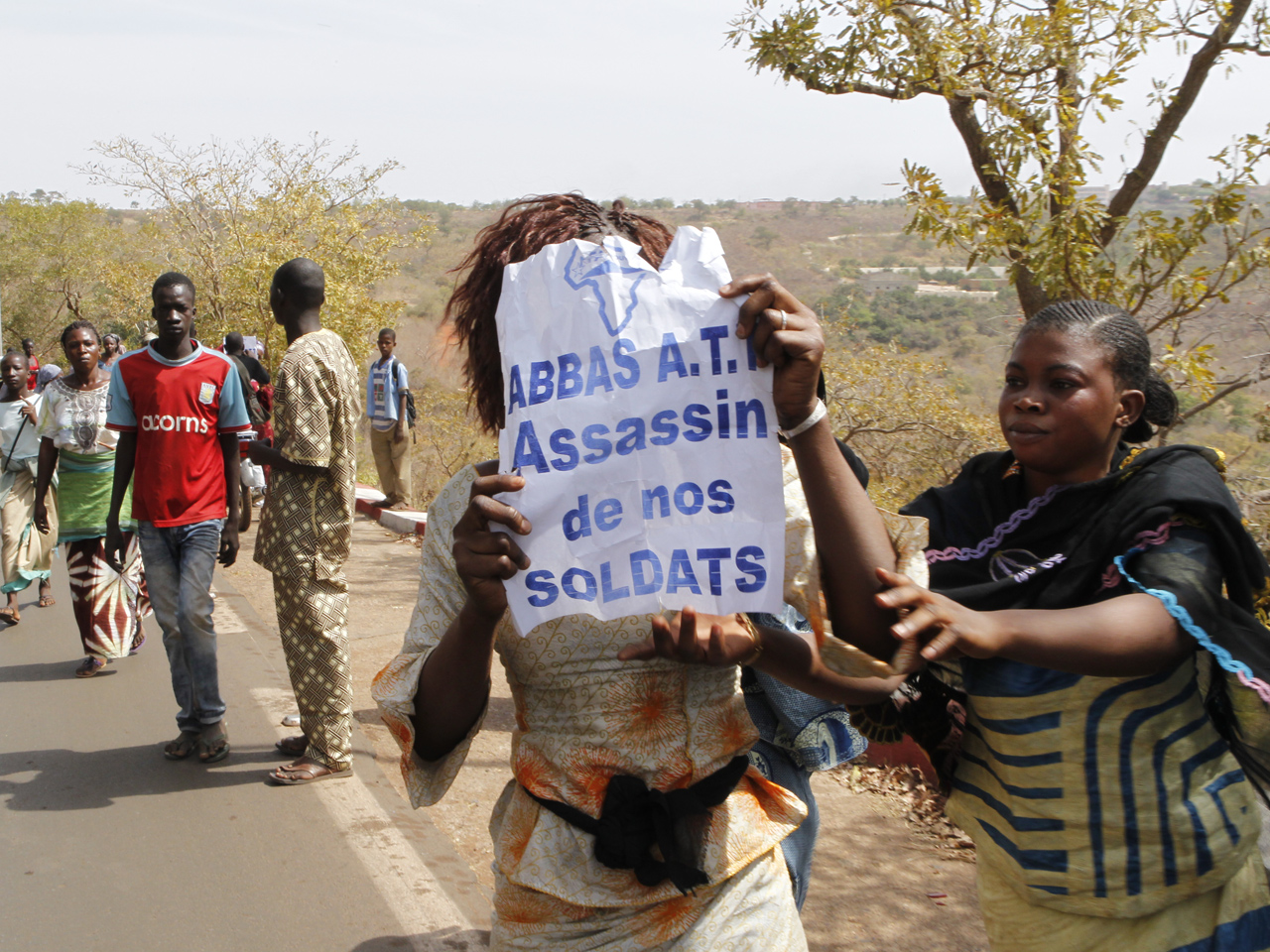 (CBS/AP) BAMAKO, Mali - Soldiers on Wednesday stormed the state TV and radio station in the Malian capital, attacked the presidential palace, and there are reports of a mutiny at a base in the strategic town of Gao in the north.

A defense ministry official told the BBC that a coup d'etat was under way, but the president of Mali reportedly countered those claims Wednesday.

"There is no coup in Mali. There's just a mutiny," President Amadou Toumani Toure tweeted, according to the Financial Times.

As fears of a possible coup gripped the country, a military mutiny spread from a garrison in the capital to one thousands of miles away.

The military is angry over the government's failure to come to grips with a northern rebellion by Tuareg separatists that has claimed the lives of numerous soldiers since January.

The series of events began Wednesday morning at a military camp in the capital, during a visit by Defense Minister Gen. Sadio Gassama. In his speech to the troops, the minister failed to address the grievances of the rank-and-file soldiers, who are angry over what they say is the government's mismanagement of the fight, and the lack of arms and food supplies.

Recruits started firing into the air, according to a soldier contacted by telephone who asked that his name not be published because he wasn't authorized to speak to the press. He said that they then stoned the general's car, forcing him to leave the camp in haste.

By afternoon, soldiers had surrounded the state television station in central Bamako, and by evening, troops had started rioting at a military garrison located in the northern town of Gao.

A freelance journalist from Sweden who was driving to her hotel near the TV station, said that trucks full of soldiers arrived in quick succession and surrounded the building.

"We saw a couple of trucks, with military on them. They came and started setting up checkpoints. There were military in the streets, stopping people. People were afraid," said Katarina Hoije. "When we reached our hotel which is just in front of the TV station, there were lots of military outside, and more cars kept arriving, pickup trucks with soldiers on them."

She said that they set up two machine guns facing the building. Soon after, TV stations throughout the capital went black. There was no signal on state radio.

The soldiers who took part in the attack said they want to pressure the government to listen to their demands, and not to overthrow the landlocked nation's democratically-elected leaders.

But in the capital, which has weathered multiple coups, the population was on edge. Throughout Western Africa, often referred to as the continent's "coup belt," military takeovers usually begin by the seizing of the state broadcaster, so that the leaders of the putsch can inform the population.

In Washington, U.S. State Department spokeswoman Victoria Nuland said: "The situation is currently unclear and unfolding quickly. We understand that radio and television signals are dead. There are reports of military forces surrounding the presidential palace and movement of vehicles between the palace and the military barracks."

The Embassy in Bamako is advising American citizens to shelter in place, and to stay off the streets Thursday.

In the strategic northern town of Gao, located over 2,000 miles from the capital, the mutiny started at sundown at a military base just outside the city. A military student who was at the base and who asked not to be named out of fear for his safety said that the young recruits started shooting in the air. They then took hostage four to five of their senior commanding officers, and sequestered them, saying they will not release them until their demands are met.

They then began going door-to-door looking for the commander of the camp, a general who is in charge of operations against the Tuaregs, said the student.

The general was nowhere to be found and by nightfall, the soldiers had broadened their search beyond the barracks to the town of Gao, located 4 miles away.

The Tuareg uprising that began in mid-January is being fueled by arms leftover from the civil war in neighboring Libya. Tens of thousands of people have fled the north, and refugees have spilled over into four of the countries neighboring Mali due to the uprising.

The government has not disclosed how many soldiers have been killed, but the toll has been significant. In February, military widows led a protest. In an attempt to diffuse tension, the Malian president allowed himself to be filmed meeting the widows, who publicly grilled him on his handling of the rebellion.